As was expected after he won the Democratic primary earlier this year, retired New York City Police Department captain Eric Adams has prevailed in the city’s mayoral election.

When sworn in on Jan. 1, he’ll be the 110th NYC mayor, and only the second Black person to hold the office.

He was declared the winner just 10 minutes after polls closed.

Adams is currently the borough president of Brooklyn and campaigned on an anti-crime platform, promising to increase policing in New York and enact reforms of some kind, and presented himself as someone capable of understanding those issues from both sides. 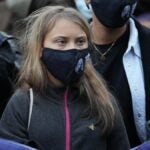 He also catered his campaign to people who at least identify as working class, and according to The New York Times was also heavily favored by labor unions as well as wealthy donors.

He was endorsed by a wide array of party leaders in the city, including outgoing mayor Bill de Blasio.