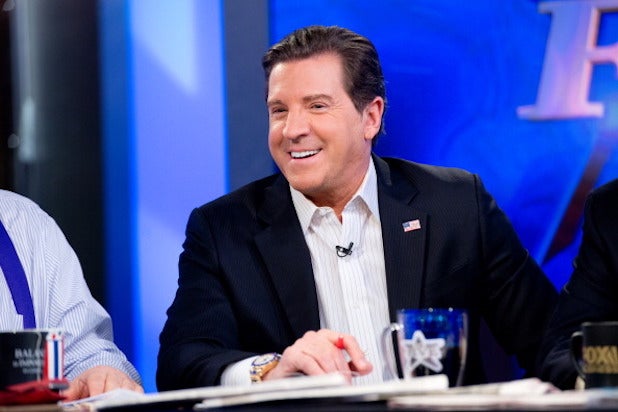 Eric Bolling has broken his silence Monday amidst a Fox News investigation into claims that he sent a lewd photo to female colleagues.

“Overwhelmed by all the support I have received,” he tweeted. “Thank you I look forward to clearing my name asap.”

The news host was suspended from the network “pending the results of an investigation, which is currently underway,” a Fox News spokesperson told TheWrap on Saturday.

Overwhelmed by all the support I have received. Thank you

I look forward to clearing my name asap

A Huffington Post report Friday said that according to several unnamed sources, Bolling sent at least three female colleagues an unsolicited photo of male genitalia. The outlet cited “a dozen sources” who said said that the messages were sent several years ago and the women found them “deeply upsetting and offensive.”

“The anonymous, uncorroborated claims are untrue and terribly unfair,” Bolling’s lawyer, Michael Bowe, told CNNMoney in a statement on Saturday. “We intend to fully cooperate with the investigation so that it can be concluded and Eric can return to work as quickly as possible.”

Bolling currently hosts “The Fox News Specialists” and the Saturday program “Cashin’ In,” both on Fox News. He’s been a prominent Trump supporter, routinely praising the president on his shows.

“Cashin In” was taped Friday morning per usual and was pulled once FNC was made aware of the allegations via the HuffPost inquiry/story. It was replaced Saturday by a live half hour of news. Rotating substitute hosts will be in place on “The Specialists” (weekdays/5 p.m.) and “Cashin In” (Saturdays at 11:30 a,m).

The network has faced a variety of accusations and lawsuits since the Roger Ailes scandal initially surfaced. Still, it remains the most-watched network in cable news.