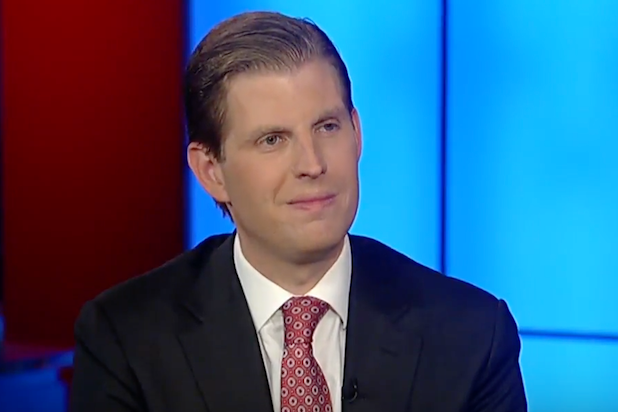 First family member Eric Trump is getting skewered on Twitter after a tweet suggesting that Ellen DeGeneres is part of the “deep state.”

“Shocking,” the 33-year-old Trump tweeted with a screenshot of the suggestions. “Once again, here are the @Twitter ‘suggestions’ of who I should follow. #DeepState.”

“Deep State” has become a catch-all conspiracy theory, widely discredited, that suggests there is an effort by government employees and others to influence state policy heedless of democratically elected leadership.

Needless to say, internet users were quick to point out that none of the three people Eric Trump noted in his tweet are government employees or hold elective office.

“Ellen DeGeneres and two people not in office = ‘The Deep State,'” noted one commenter. “Eric really is the dumbest Trump.”

Following his tweet, the younger Trump was roasted by users who laughed off his claims.

LOL good, we're officially at the clown stage of this. Well done Eric Trump. Now everyone knows you don't know what sense is. https://t.co/zXvfvDSF3b

????????????According to @EricTrump my Zappos suggestion may be coming right from the deep state. #MoronJr #EricTrump pic.twitter.com/c7MxE7sWAs

Yes. Ellen. You got her.

It’s over, everyone! Eric caught us. https://t.co/iZVlAqPcE1

Apparently Ellen is part of the "Deep State. @TheEllenShow can you tell us where you were when Kennedy was assassinated? https://t.co/ntzggx88ij

Ellen DeGeneres and two people not in office = “The Deep State.”