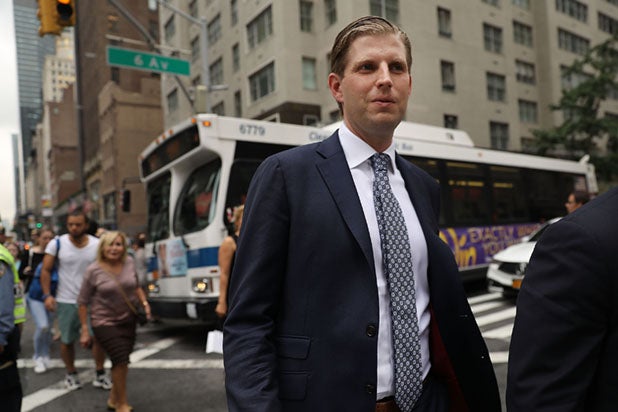 Eric Trump came to his father’s defense on Tuesday amid backlash against the president’s renewed use of the term “Pocahontas” as an insult against Massachusetts senator Elizabeth Warren.

“The irony of an ABC reporter (whose parent company Disney has profited nearly half a billion dollars on the movie “Pocahontas”) inferring that the name is ‘offensive’ is truly staggering to me,” the younger Trump wrote on Twitter.

Trump was referring to ABC News reporter Jon Karl, who pressed White House Press Secretary Sarah Huckabee Sanders about the president’s use of the term. “Why did he feel the need to say something that is offensive to many people while honoring the Navajo Code Talkers, these genuine American heroes?” he asked.

Sanders denied that the comment amounted to a racial slur, saying, “I think that’s a ridiculous response” and that “it certainly was not the president’s intent.”

President Trump has repeatedly used “Pocahontas” as a derisive nickname for Warren, a reference to her claim that she is 1/32nd Cherokee and a take on the “Fauxcahontas” insult lobbed at Warren early in her political career.

Disney’s “Pocahontas,” on the other hand, is a 1995 film inspired by the historical figure herself that has taken some criticism for its historical inaccuracies and sanitized depiction of western colonialism.

On Monday Trump revived the insult at an event at the White House honoring the Navajo Code Talkers, who used a code to communicate messages during WWII.

“You were here long before any of us were here,” he said. “Although we have a representative in Congress who they say was here a long time ago. They call her Pocahontas.”

The irony of an ABC reporter (whose parent company Disney has profited nearly half a billion dollars on the movie “Pocahontas”) inferring that the name is “offensive” is truly staggering to me.