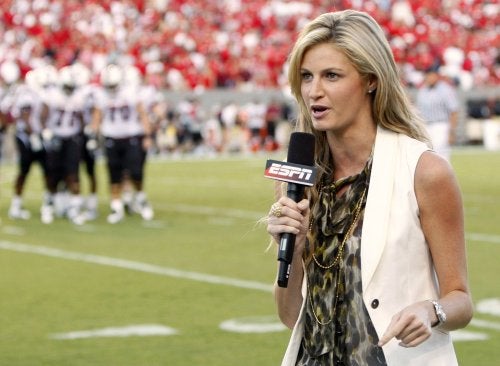 The large knot of photographers and TV crews standing outside the Roybal Federal Building this morning could only mean one thing: Another episode of the daily Los Angeles dramedy known as Celebrity Court.

Today’s installment was really a celebrity event twice removed. Michael David Barrett (pictured below) was being arraigned for allegedly following ESPN reporter Erin Andrews (pictured left) around the country and videotaping her, au naturel, through peepholes in various hotel rooms. Until the resulting Andrews videos went viral on the Internet last summer, there were probably a few people in the country who had ever heard of her.

That all changed once the images of her walking around in her room nude became part of the national pop heritage. (“ESPN Hottie Erin Andrews in Peep Shocker,” brayed the N.Y. Post in July.)

The hook for the media’s latest legal obsession boiled down to three familiar words. Woman. Blonde. Naked. They may as well have hung a banner across the Roybal – or better yet, rigged up a movie marquee – reading “Naked Blonde Woman.” Take any one of those words away and media interest in Mr. Barrett would have plummeted by a third. But strung together they were more than enough to lure a platoon of reporters to the building’s third-floor arraignment room, even though Andrews was not on trial, nor was to be found, nude or clothed, anywhere near the courthouse.

Most of us were at least mildly embarrassed to be covering Barrett (who’s free on $100,000 bond), and so we reminisced about previous times we’d been up here, or traded fond stories about Anthony Pellicano and O.J. Simpson. For the record, Barrett, 48, pleaded not guilty to a charge of interstate stalking. His January 12 trial has been assigned to Manny Real, the 85-year-old U.S. District Court judge who was recently rebuked by a panel of colleagues for his shoebox accounting methods for keeping track of nearly $34 million that had been earmarked for political victims of the late Philippine dictator Ferdinand Marcos.

Real (pronounced “reel”) was appointed to the bench by Lyndon Johnson and is one of those judicial geezers who are a dream come true for reporters but a headache for attorneys and prosecutors alike.

According to a recent article written by Tom Hayden in the Nation, “Virtually every lawyer in the Los Angeles federal courts is aware of his often bizarre and imperious 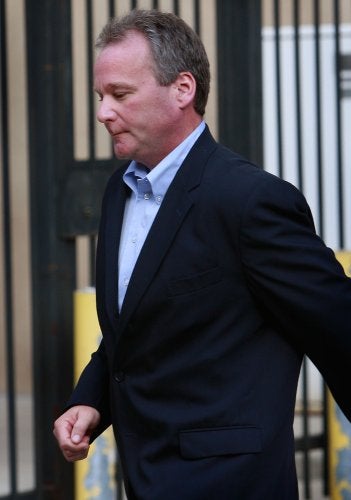 behavior . . . Researchers calculate that that Real’s reversal rate on appeal is often ten times the average among his federal counterparts.”

The Barrett case is bound to bring out Manny in all his curmudgeonly glory. It’s also worth noting that this is the federal Central District of California Court’s first high-profile case since the departure of U.S. Attorney Tom O’Brien for private pastures. At the moment O’Brien’s vacancy has not been filled, but his office got this high-profile case nevertheless.

One of O’Brien’s office’s last controversial decisions was to unsuccessfully prosecute Missouri hausfrau Lori Drew on federal cyber-crimes charges for her role in the MySpace-bullying of a 13-year-old girl who eventually committed suicide. O’Brien drew considerable heat – not only for pursuing what was considered at best a Missouri misdemeanor case, but for bringing that particular circus to Los Angeles on the grounds that MySpace’s headquarters is in Beverly Hills.

Similarly, while Barrett, an Illinois resident who was arrested in Chicago, had allegedly videoed Andrews in hotels in Milwaukee and Nashville, the case was filed in L.A., the media capital of the world, presumably because this is the home of TMZ — which Barrett is accused of contacting with an offer of sale of the Andrews tapes. When TheWrap contacted the U.S. Attorney’s office to ask why Barrett’s trial is being held here, we told, tersely, “Because the case was filed in L.A.”