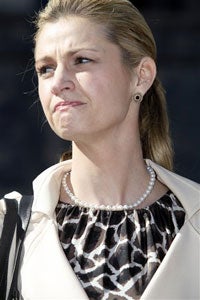 Michael David Barrett, the Chicago man convicted of stalking ESPN sideline reporter Erin Andrews — creepily videotaping her nude in hotel rooms through a peephole last summer and uploading the footage online — was sentenced to 30 months in a Los Angeles court on Monday.

Barrett, a 48-year-old insurance executive, had agreed to serve 27 months in prison on an “interstate stalking” charge. Andrews, however, said she did not agree to the plea, and wanted Barrett to pay her $335,000 in addition to serving a jail sentence.

U.S. District Judge Manuel Real ordered Barrett to pay Andrews’ out-of-pocket costs — between $5,000 and $7,366; restitution of the larger portion, currently being covered by ESPN, will be determined at a later date.

Barrett is out of custody, and has until May 3 to surrender to begin serving his sentence.

Andrews, who had said she was “hellbent” in testifying in the case, was in court Monday to face Barrett. "You violated me and you violated all women," she told him. "You are a sexual predator, a sexual deviant and they should lock you up."

"I would’ve liked a longer sentence," Andrews said. "I did nothing wrong."

Barrett told the court "there are no words to tell Ms. Andrews how sorry I am for what I’ve done to her. I hope someday she can forgive me."

When asked if she accepted Barrett’s apology, Andrews replied: "Would you?" She added: "His apology didn’t take the video down from the Internet."

"I’m at the the anger stage," Andrews continued. Of the ordeal, she said: "I think about it every second of every day."

While Andrews is well known to college sports fans, her profile — beyond the stalker case — is about to get even bigger: She’s set to appear as a contestant on ABC’s “Dancing With the Stars.”

Andrews said she was in talks with the show’s producers before the incident last summer, and was forced to turn it down during the case. She’s now ready, she said, adding, "I want to live my life."