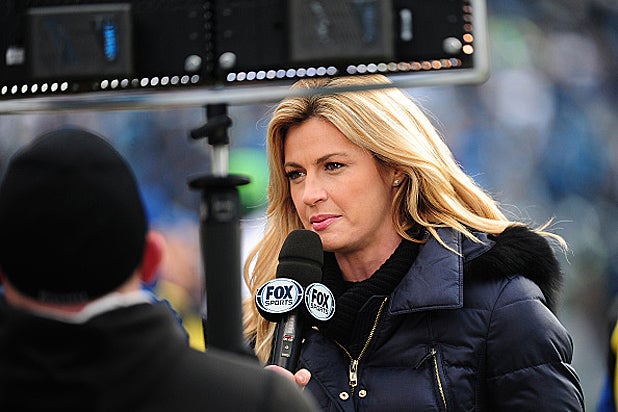 Erin Andrews’ father brought his daughter to tears Wednesday while testifying during the civil trial related to the sportscaster’s 2009 stalker case.

Steve Andrews said on the stand that the 37-year-old is a shell of her former self ever since a man was caught spying on her while she was nude. “She’s afraid. She’s afraid of crowds, afraid of people. She doesn’t trust anymore,” he revealed, according to ESPN.

Michael David Barrett pleaded guilty to recording videos of Andrews through peepholes that he altered on the doors of her hotel rooms in Nashville, Tenn., while she was covering college football for ESPN in 2008. He also admitted to attempting to make secret recordings of her in Milwaukee and was sentenced to serve 2-1/2 years in prison.

The Fox Sports reporter and “Dancing With the Stars” host has since filed a $75 million lawsuit against Barrett, West End Hotel Partners, which is the franchise owner of the Nashville Marriott at Vanderbilt University, and Windsor Capital Group, which manages the hotel. She maintains that someone affiliated with the hotel gave Barrett her room number and he was intentionally placed in a room next to her.

When Andrews found out about the videos, which were subsequently leaked onto the Internet in July 2009, she called her father “hysterically crying, screaming out of her mind” and was afraid for her life, her father told the Nashville courtroom Wednesday.

She was so disturbed about the secret footage that she vomited before agreeing to an FBI request that she watch the nude videos so agents could find clues about who took it, he said.

“This was about the worst thing that could have happened to her from the perspective of self-pride, comfort in the way you look,” Steve Andrews continued.

Attorneys for the hotel companies claim Barrett was an experienced traveler who schemed his way into getting a room next to Andrews by using an in-house phone at the hotel to find out where she was and then requesting that he be placed in a room next to hers.