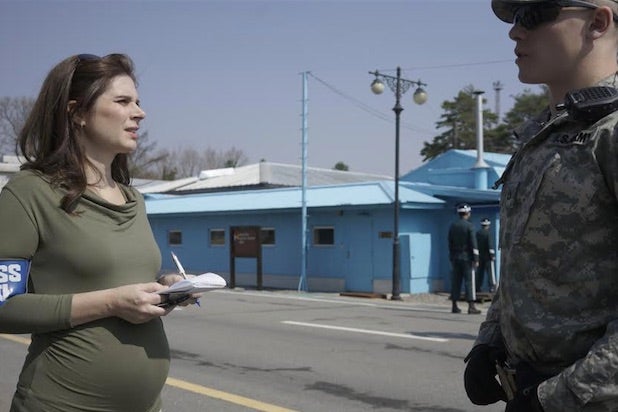 A few days before the primetime anchor went into labor, she spoke to TheWrap about balancing motherhood and the 24/7 TV news grind, her show’s ratings momentum, 2016 and more. The “Outfront” anchor’s secret to staying up on the news while raising her first child: “My little guy went through a long period where he didn’t sleep, and luckily I’m an insomniac anyway, so I was able to deal with that.”

TheWrap: Over the last year, OutFront has become more buzzy, appointment TV, i.e. your spat with Ted Nugent over him calling President Obama a “subhuman mongrel.” Is the show trying to intentionally strike a cord or is it more organic?

Erin Burnett: I think it’s organic mostly. You can’t force something to become [buzzy]. I suppose you could, but that’s not really our style. It was fun, and it was watchable, but I also think it helped move the needle forward on the conversation. Look, Ted Nugent’s normal audience might not be the audience watching the show, but a lot of different people got apart of the conversation, so we were able to feel like we were making a journalistic contribution as opposed to a fun spectacle. TV journalism is about hard journalism, but of course, making it watchable and engaging to people. That was an example where you can do all of those things at once, which is ultimately our goal.

Also Read: Ted Nugent Takes Credit For Piers Morgan's Cancelation: I Got His 'A- Thrown Out' (Video)

Donald Trump has become the gift that keeps on giving for media. When every show across all networks is leading with him, what’s your take to differentiate your coverage?
I’ve covered Donald for a long time, obviously before I came here I was a financial journalist. I interviewed him at CNBC and he was apart of a series that we did and I was on The Apprentice a few times when Ivanka couldn’t be there. In a sense, it gives us a different perspective on Trump, and it’s an interesting confluence that you see now because a lot of people see it purely as a political story and for us, given our background. We’ve done pieces on Trump’s finances and what his buildings are worth; obviously there’s this whole spat right now behind Forbes and Trump on exactly what he’s worth, $4 billion or $8 billion–frankly there both a lot of money– but we were able to bring those specifics to it. And with Donald, that’s such a core part of who he is and how he talks. People use the words “brash billionaire,” but we’re able to define that a little bit more.

I don’t know what his goals and ambitions are with the run that he is, but there’s one thing you can’t take away from him, which is he has been very successful in business. You can’t just say that’s not true, it is true. I think people do need to acknowledge that. As he says, he is very, very rich.

TheWrap: Outront has spiked in the ratings over the last year, particularly in the younger 25-54 demo (the show just beat MSNBC’s “Hardball” with Chris Matthews in the demo for the fourth straight quarter) What’s been the formula?

Erin Burnett: When we first came here, it was this incredible oyster, it’s like “here’s your oyster, you get to be at CNN, you get to do this global stuff, you have a primetime show, which is an incredible opportunity. We spent time figuring out what that was and over the years have gotten more and more sure as a show. Susie [Xu] came in as the EP, we’ve had some changes that’ve really contributed to why we are growing and what our voice is and what we like to cover. We’ve gotten incredibly consistent. I think over the past year, it’s really come together for us. I think if you build it, they will come, whether that’s in TV, online, or all the different types of media right now.

TheWrap: What’s different about CNN now than when you came over four years ago?

Burnett: I think it has a new energy, enthusiasm, and an identity that maybe were a little less defined before. When I got here it was a very slow news cycle, there were a lot of changes coming but nobody knew what they were going to be. I worked for Jeff Zucker back at NBC, so I am a believer in Jeff’s ability to motivate a newsroom. He’s put a fire under people. He’s involved like an executive producer, which sometimes you’re like, C’mon Jeff, and sometimes you’re like, “Thank God Jeff got involved because he asked this question and it’s better for everybody.” I feel people are happy, and I think for a long time, that might’ve not been the case.”

Burnett: The crazy one. He’s not a character, he is who he is.

Burnett: Passionate–believes in people (including Erin, who he served as a mentor to Burnett at NBC)

TheWrap: With your second child, how do you balance motherhood with the 24/7 cable news grind?

Burnett: We have calls very early in the morning and he hears them, he [son Nyle] hears when I say, ‘Oh wait, we gotta listen to this interview on the radio”…so that’s what he gets to listen to and that’s what he’s exposed to. I figure there’s a positive, it will be good for him over time as opposed to listening to Barney in the morning.

TheWrap: Politicians like the talking point of our “kids and our grandkids.” Does having children now shape your mind when covering tougher stories like gun violence and war?

Burnett: Yes, I guess in a way because it’s more tangible in my mind. It’s not even so much about having kids, but as you start to get older, you’re like, “Gosh, we used to be that generation that everyone talked about, “the future is yours.” As you get older, you realize this is our responsibility now, can’t be looking at someone else and blaming them for what’s being handed to me. I do think about it, on what kind of world my children will live in, and how I want it to be a place they want to explore and make their own.