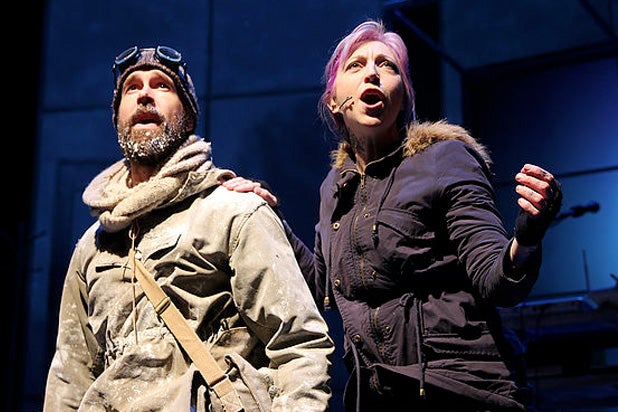 Seldom has quirk felt more like work than sitting through “Ernest Shackleton Loves Me,” a new Off Broadway musical that opened Sunday at Second Stage’s Tony Kiser Theatre after runs in Seattle, Boston and New Jersey.

The one-act musical doesn’t just embrace its offbeat premise but fairly wallows in it — seeking to tell the parallel stories of a struggling single-mom artist (in Brooklyn, natch) and the real-life Antarctica explorer Ernest Shackleton and his travails way south of the border a century ago. (Alexander V. Nichols’ impressive production design includes projections of actual footage from his expeditions.)

How do you combine such disparate plots? The playwright Joe DiPietro, whose credits include “Memphis” and that suburban chestnut “I Love You, You’re Perfect, Now Change,” has devised a doozy of a setup: He keeps his heroine (played forthrightly by the electric violinist Val Vigoda, who also wrote the show’s lyrics) up for 36 straight hours and has her hallucinate the great explorer (an energetic Wade McCollum) after recording a music video for a dating web site.

The site is hilariously dubbed CupidsLeftovers.com, and Kat’s song (Brendan Milburn is credited as the composer) is a marvel of live-looping her voice and various instrumental phrases to produce a symphonic mini-masterpiece.

Vigoda has a strong voice, and her onstage instrumental playing, particularly on violin solos, suggests she was a standout in her pre-“Shackleton” career touring with Cyndi Lauper and the Trans-Siberian Orchestra. But she’s less convincing as an actress, particularly since she seems to be in a completely different production from her lone co-star.

McCollum cuts a humorous figure, or actually several, since he plays multiple roles — from the stage manager who tells the audience to silence their phones and then insults them (“Man, this house looks dead. They’re probably just upset they couldn’t get into “Hello, Dolly'”) to the put-upon boss who casually fires her via Skype to the dude-like baby daddy who abandoned Kat and their son to tour with a Journey cover band. (That’s one of the script’s many too-easy sources of humor.)

McCollum is particularly dynamic as Shackleton, who mysteriously hears Kat’s music across time and becomes enamored of her as he draws comparisons between his very real plight with his team in Antarctica 1914-17 and hers in a modern wintry Brooklyn apartment with no heat. Cue the images of sled dogs who will be eaten and the inevitable cannibalism jokes — an extreme to which Shackleton’s crew never had to resort.

McCollum is confident to the point of absurdity — and his broad comic and often gut-busting performance suggests a cross between Dudley Do-Right and “The Simpsons” news anchor Kent Brockman (he gets a laugh every time he says his name, going up nearly an octave on the first syllable of Shackleton). He even manages to sell some of DiPietro’s deliberately anachronistic jokes, such as: “I’d kiss you right now if I weren’t a gentleman and my testicles weren’t frozen to my leg.”

As directed by Lisa Peterson, though, Vigoda is simply no match for his outsize personality. And the discrepancy in performance styles and onstage charisma has the unfortunate effect of amplifying the many weaknesses of the premise and plotting. (Why would this woman ever have stayed so long with the doofus covering Journey songs?)

And then there’s the score, which skis swiftly downhill after that brilliant auto-looping opener that required Vigoda to hop around the stage and hit various pedals so that musical phrases could be be repeated. Despite a few standouts like the rollicking “Money and Musicians and Explorers,” which memorably rhymes “broker” and “mediocre,” too many of the tunes drift into the troubled waters of sea chanty pastiche.

Which I imagine is the last place any self-respecting experimental composer from Brooklyn wants to find herself.

“Ernest Shackleton Loves Me” is cleverly staged and boasts some striking individual elements. But overall, this show proves more twee than treat.