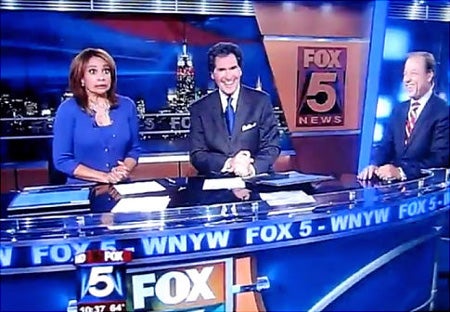 Ernie Anastos — the veteran WNYW anchor responsible for launching “keep f—ing that chicken” (alongside "Imma let you finish" and "You lie!") into our pop culture parlance — apologized during the 10 p.m. newscast Thursday, less than 24 hours after inexplicably uttering those YouTube-ready words on air.

"I apologize for my remarks to anyone who may have been offended," Anastos said last night.

The apology came after Lew Leone, the station’s VP and general manager, issued this terse statement. "We are disappointed with Ernie’s comment on the air last night.”

Meanwhile, what Anastos meant to say (“clucking,” “plucking”?) was debated rather heavily on the Web Thursday. By mid-afternoon "Ernie Anastos" rose as high as no. 5 on Google Trends. "Keep plucking that chicken" was at no. 9.

Anastos’ co-host Dari Alexander, whose perfect facial expression upon hearing Anastos’ slip cemented the clip’s induction into the Local News Flub Hall of Fame, took to Facebook to defend her colleague: “[The] look was me thinking, ‘Oh, no, I don’t think it came out right.’ Totally innocent … it happens."

A spokesperson for WNYW said Anastos would not be fined or suspended for the chicken slip heard ‘round the world.

Here’s the video, in case you missed it yesterday: