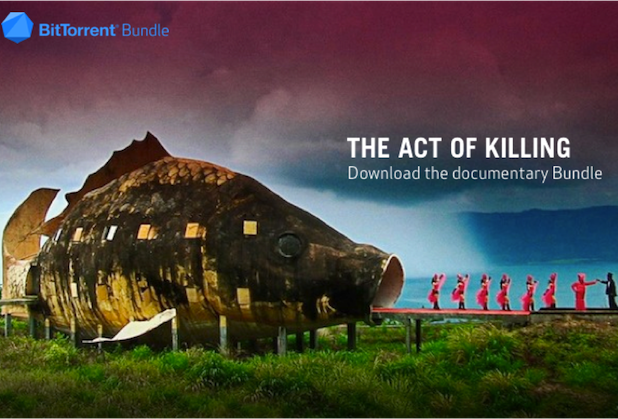 Drafthouse Films has released a free suite of videos, essays and photographs related to “Act of Killing,” the award-winning documentary about the leaders of Indonesian death squadrons. The distributor is releasing the materials as a BitTorrent Bundle, a new way in which BitTorrent is letting artists and other creatives offer fans a window into the creative process using open technology.

This bundle includes videos interviews with director Joshua Oppenheimer as well as Errol Morris and Werner Herzog, two legendary documentarians who produced “The Act of Killing.” It also includes an essay Morris wrote about the film, stills from the movie and an essay on the film’s impact in Indonesia.

Drafthouse chose to make the bundle available on Tuesday to support the launch of the documentary on iTunes.

“Our goal is to reach as many people as possible – to preserve this film as a documentary, and as a testament to what happened in Indonesia,” Evan Husney, Creative Director at Drafthouse Films, said in a statement. “BitTorrent Bundle allows us to address a global audience of more than 170 million: to ensure that awareness of the film’s message reaches beyond the Internet’s censors and firewalls.”

The film made the Academy’s shortlist for the Best Documentary Oscar. Final nominations will be announced January 16.