ESPN regularly reports on record-breaking feats or historical firsts, but on Sunday it will be one of their own boasting a milestone, as Linda Cohn becomes the first anchor to host 5,000 episodes of “SportsCenter.”

The landmark segment of the flagship sports show will air on Sunday, Feb. 21, at 8 a.m. ET on ESPN. So far, more than 60,000 “SportsCenters” have aired since ESPN was launched in September 1979, and Cohn has hosted 12 percent of them — but she wasn’t counting.

“When you are doing something you love, you are not counting the times — you don’t think about it, you just want to be good,” Cohn told TheWrap, adding that she only discovered she had nearly racked up 5,000 episodes when her producer did the math for her. “We were shooting the numbers around and realized I’d done the most SportsCenters.”

The secret to her sustainability in the ever-evolving media world is simple, Cohn explained. “I am a fan first, I love being out where things are happening, whether it’s an NBA Game 7 or a locker room after a championship. It’s sort of like a legal drug for me. Here we are in February right now, one of the dog days of the sports calendar, but there’s always something going on.

“A lot of colleagues became jaded over the years, but I am exactly the same,” said the New York native, who is still a passionate follower of the Giants, Mets, Knicks and Rangers, and hasn’t quite given up her dream of becoming an NHL goalie one day.

Cohn started out at WALK-AM radio station in Patchogue, N.Y., previously making sportscasting history by becoming the first full-time U.S. female sports anchor on a national radio network when she was hired by ABC in 1987.

“I never thought about my job being unusual for a woman,” she explained. “I just thought about constantly doing the best job I can do and proving that I wasn’t in it just because it was a ‘cool thing to do.'”

While she has been on the show for 23 years, Cohn said the “last 10 have been the best, I got better with age. I am in my comfort zone.” Many women in front of the camera may fear that they have an expiration date and will be demoted for someone younger and less experienced, but “ESPN really looks for talent first, someone with a high skill level and the ability to do their job,” she said.

“I have always said that just because networks have a lot of women working at them doesn’t mean they are great at hiring them,” the 56-year-old host added.

Also Read: ESPN in Talks to Widen Its Online Streaming to New Services 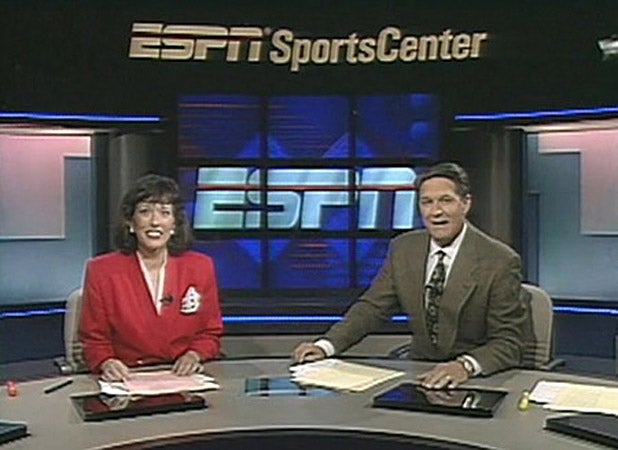 Back in 1992 when she joined “SportsCenter,” the Washington Redskins had just won Super Bowl XXVI, the Summer Olympics were held in Barcelona, Spain, and Chicago Bulls star Michael Jordan was named MVP of the NBA. Since then, there have been plenty of memorable moments — and a few she’d probably rather forget. “I had some great interviews with Jordan back in the day,” Cohn recalled, adding that often “the most satisfying interviews are the ones that even with the camera rolling, the athlete knows they can trust you.”

One sit down that is still on her bucket list is with the golden boy New England Patriots quarterback. “I would love to interview Tom Brady, I would like to get a shot at him being natural and less robotic … less under coach Bill Belichick’s wing.”

She is at the top of her game now, but Cohn admitted that just like the sports stars she covers, her career had its low point and she nearly lost her job at ESPN two years into it. “They were going to let me go — I was a lame duck for six months but they gave me a second chance — and now I am known as the ‘highlight queen,'” she said. “That is why people always have to work to get better and believe in themselves.”

With many more “SportsCenters” in her future, Cohn is now looking forward to the Stanley Cup playoffs, and hoping her Mets make it back to the World Series.