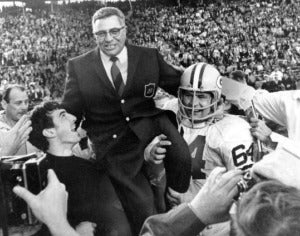 Developed by ESPN Films, Andell Entertainment, the National Football League and De Niro’s Tribeca Productions, “Lombardi” will be penned by screenwriter Eric Roth (“Forrest Gump,” “The Good Shepherd”) and focus on the coach who turned the Packers into five-time league champions.

ESPN and Andell have acquired Lombardi’s life story rights through the coach’s estate and son. Additional source material has been licensed through the book “Instant Replay,” which was written by former Packer Jerry Kramer and sports writer Dick Schaap.

The producers plan to have the film ready for release sometime around Super Bowl weekend inn 2012.

“Having an icon portray an icon on film is amazing, and with a writer as talented as Eric working on the script, the results could be magical for NFL fans,” said Ron Semiao, senior VP, ESPN Films.