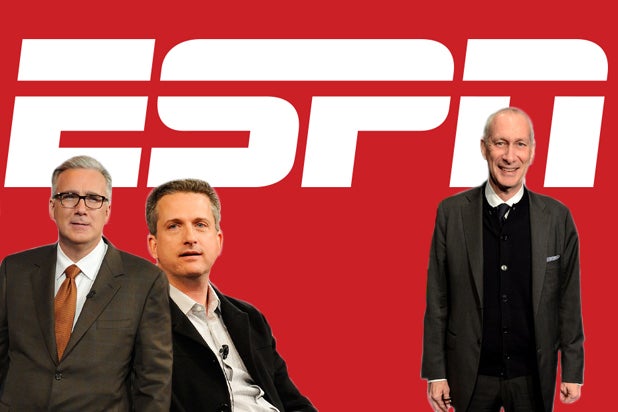 As Disney prepares to announce its earnings on Tuesday, one thing to keep an eye on is ESPN, a powerhouse unit whose profitability and dominance have long been taken for granted.

But lately, there have been some signs that ESPN may not be impervious to the troubles facing the rest of the cable universe.

The massive cable channel is hemorrhaging talent and losing subscribers — but still lays claim to strong ratings and general dominance in sports coverage.

“I do not think the house is crumbling down,” media analyst and author James Andrew Miller Miller told TheWrap. “I think that things are more difficult now.”

One of the most visible challenges is the recent departure of high-profile on-air talent, including popular though controversial personalities like Colin Cowherd, Keith Olbermann and Bill Simmons. Cowherd left last month to rejoin Jamie Horowitz at Fox Sports, and Simmons headed to HBO.

More troubling for ESPN is the loss of 3.2 million subscribers since last July, bringing its total to 92.9 million. According to the Wall Street Journal, that’s second only to the Weather Channel in terms of a percentage subscriber loss since 2011. However, the bulk of the Weather Channel’s losses are due to its blackout by Verizon FiOS since March in a dispute over carriage fees.

For its part, ESPN believes that its lost subscribers are almost entirely young, non-sports fans, which explains the lack of a negative effect on its ratings so far.

And ESPN is still way ahead of its competition. ESPN ranked as the most-watched cable sports network in the second quarter 2015, averaging more than three times the audience of NBC Sports Network and Fox Sports 1 on a total day basis. Put another way, ESPN averaged 83 percent more viewers than NBCSN and FS1 combined.

But there is still significant money at stake with the significant drop in total subscribers.

The average carriage fee for ESPN subscribers has been reported at $6.61 monthly per subscriber, which would suggest the network will lose nearly $21.2 million in fees this year from a smaller subscriber base. By similar calculations, lost subscribers would also shave $2.6 million for ESPN2 and $704,000 for ESPNU.

That may be small potatoes for parent company Disney, which pulled in $15.11 billion in cable revenue last year. But the trend line is cause for concern since ESPN has long had an outsize presence in the cable business, commanding high carriage fees from cable providers.

It seems fair to point out that $6.61 per user may actually be a bargain in terms of ESPN’s value to consumers who are increasingly tempted to cut the cord from comprehensive cable packages in favor of online streaming alternatives or a la carte TV options.

In March, media analyst Michael Nathanson of MoffettNathanson estimated that ESPN’s value in a true a la carte world at $36.60 per month per subscriber. Miller concurred with that assessment though it’s har.

And ESPN boasts some unique advantages that any other cable network would envy, including a dual-revenue stream from advertising and carriage fees, a dominance in licensing and a consistency in the popularity of its programming from year to year.

As Miller noted, we have no idea if NBC’s “The Voice” will still be a hit in three years, but the owner of the College Football Playoffs has a perpetual lock on viewership.

“This is a marathon they’re running,” Miller said, “not a dash.”