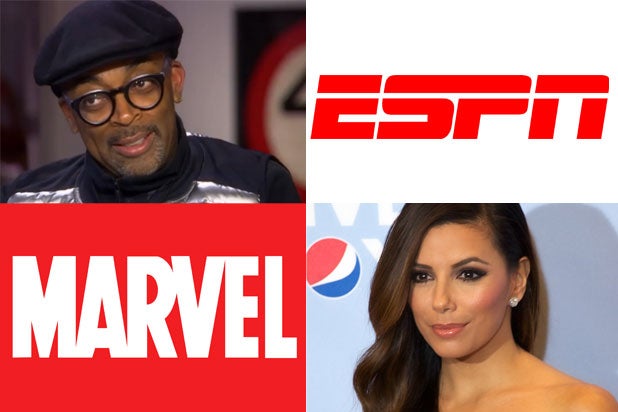 ESPN has revealed three new film series collaborations on which they will combine forces with a comic book giant, a New York filmmaker and a Hollywood actress.

“Both the documentary and the short film series will provide viewers a unique look at some of the world’s most successful athletes by mixing the award-winning non-fiction style of ESPN Films with classic Marvel comic book art, design and creative animation to truly bring a unique perspective to the journeys of these key figures,” said an ESPN statement sent to TheWrap.

“In many ways, athletes are blessed in their chosen fields with super-human ‘powers’ much like those of some of the great Marvel Super Heroes,” said Connor Schell, VP and Executive Producer, ESPN Films and Original Content, ESPN. “Like those characters, every great athlete has the moment where they learn to harness, develop and use their unique abilities to achieve. Eric Drath and his team have done a fantastic job at capturing and bringing to life those origin stories.”

See photos: 12 of the Most Dramatic Moments in Sport Movies in Honor of World Series (Photos)

John Cerilli, Vice President, Content & Programming, Marvel Digital Media Group, continued: “Combining ESPN Films’ unparalleled approach to sports filmmaking with the resonant themes and aesthetics of Marvel has allowed us to assemble a film that will astonish and amaze fans of both worlds.”

Both of the series are directed by Emmy-winning director/producer Eric Drath (30 for 30’s “No Mas,” “Cornered: A Life Caught in the Ring”), produced by Emmy-winner Dan Silver, and executive produced by Tracy McAndrew and John Cerilli.

ESPN also announced a collaboration with filmmaker and New York Knicks fanatic, Spike Lee, stating that “SportsCenter” will debut a new weekly segment titled “Friday Night Movie Night.” Debuting on Feb. 6 at 6 p.m. ET, a short film from one of ESPN Films’ popular documentary series will air each week, and most will be making their TV or world premiere.

Kicking off “Friday Night Movie Night” will be “Ray Allen/AKA-Jesus Shuttlesworth,” the first short from a new collection of films executive produced by Spike Lee. The series, “Spike Lee’s Lil’ Joints,” will showcase narratives that are personally curated by Lee, with the majority revolving around African-American stories that are not widely known and each short preceded by an introduction from Lee.

“People today have a thirst for new voices, for new visions, new filmmakers and ‘Spike Lee’s Lil’ Joints’ is that platform,” said the “Do the Right Thing” director. “There are great stories out there that might not warrant a full-length documentary, but they are great stories nonetheless. This endeavor will let those stores be told.”

The eight-episode series with air once a month from February through September 2015 with a second season in 2016.

Last but not least, new documentary short series “Versus” will “explore moments of inspiration, when the world of sports transcended the action on the field,” according to a statement from ESPN.

It is executive produced by Eva Longoria, who is also the director of the first short, “Go, Sebastian, Go!” that will kick off the series in May. Other directors will include: Retta (“Parks and Recreation”), Ricardo Chavira (“Desperate Housewives”) and Melissa Johnson (director, “Nine for IX Shorts”‘ “Brittney Griner: Lifesize”).

“There are so many moments from the world of sports that represent a broad cultural theme while at the same time, focus on a uniquely human story,” said Longoria. “I’m excited to be working with ESPN Films, along with a variety of talented filmmakers, to tell these stories of courage and perseverance.”

“Versus” will consist of five films that will premiere monthly from May through September 2015, with a second season in 2016. Each film will premiere on a Friday episode of “SportsCenter” followed by a tiered rollout to the “SportsCenter” app and additional digital platforms, including ESPN.com, Twitter, Facebook and others.

ESPN opened Wednesday’s TCA panel with a moving “This is ‘SportsCenter'” tribute to Stuart Scott, who died on Sunday, and a number of scheduled speakers were absent because of the recent unfortunate development at the network.