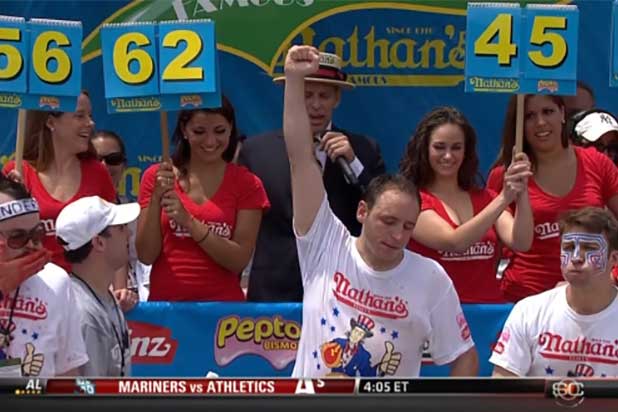 ESPN announced the renewal of its agreement with Major League Eating to televise the annual Fourth of July International Hot Dog Eating Contest through 2024 on Tuesday. It’s a 10- year extension of a pre-existing contract between the two parties.

Coney Island, N.Y., has hosted the world-renowned food frenzy, which gives participants 10 minutes to consume as many hot dogs (and buns) as possible, for over four decades, and ESPN management appears satisfied to keep the show on its cable network.

“The Nathan’s Famous Hot Dog Eating Contest has become a holiday viewing tradition for millions of Americans,” said Jason Bernstein, ESPN’s senior director of programming and acquisitions. “We’re thrilled to have the annual contest as a part of ESPN’s championship summer season — along with FIFA World Cup and Wimbledon this year — and to continue working with Major League Eating in the future to satisfy our fans’ appetites.”

ESPN and its mobile app WatchESPN — which experienced technical difficulties during the U.S.’s World Cup match against Germany on June 26 — will simulcast this year’s hot dog eating contest at 12 p.m. ET on July 4.

Internationally renowned competitive eater Joey Chestnut seeks his eighth straight title and currently holds the world record in the event after devouring 69 hot dogs and buns in only 10 minutes.