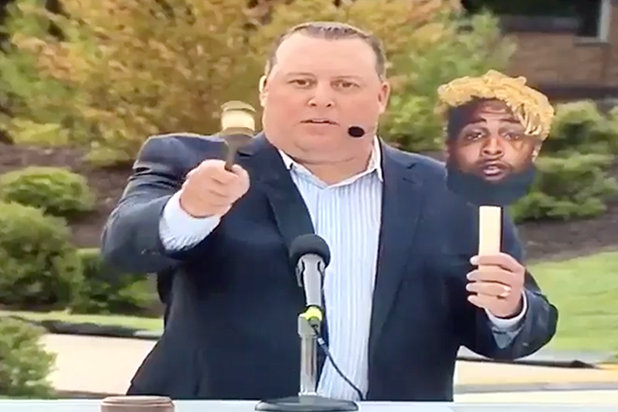 People online are getting upset about a segment that aired on ESPN as part of the network’s annual Fantasy Football Marathon ahead of this year’s NFL season.

Slate’s Ben Mathis-Lilley pointed out on Tuesday a tweet with a clip from ESPN’s segment featuring a Fantasy Football auction-style draft. The player being drafted in the segment is New York Giants wide receiver Odell Beckham Jr., an African American player. A white man ends up drafting him to his Fantasy team for $34.

“This looks like ‘Get Out.’ I don’t care if it’s a joke or Fantasy Football segment,” said journalist Shaun King on Facebook, comparing the segment to the summer hit movie that made racial supremacy ideology the focus of its horror. Others on Twitter also compared the segment to a scene in Jordan Peele’s hit movie, in which the main character is being auctioned off to a group of white people. “That sh– looked like the scene in GET OUT,” one tweeted.

ESPN apologized for the poor optics in a statement to TheWrap: “Auction drafts are a common part of fantasy football, and ESPN’s segments replicated an auction draft with a diverse slate of top professional football players. Without that context, we understand the optics could be portrayed as offensive, and we apologize.”

The ESPN spokesperson also pointed out another clip from the segment in which Tom Brady was being auctioned off, saying that the auction in question included top players from throughout the NFL.

“How did producers allow a sketch that mimics slave auctions?,” one Twitter user asks. “How can an entire network be so ton-deaf? [sic] Not cool, ESPN.”

“Dear @ESPN, Please apologize now for doing a sketch where you auctioned a black man off to the highest bidder,” King tweeted.

The segment aired as part of a 28-hour Fantasy Football marathon, which kicked off Monday at 7 p.m. The Marathon includes Fantasy Football specials in primetime, segments on multiple editions of “SportsCenter” and Fantasy Football-themed editions of other programs including, “First Take,” “Jalen & Jacoby,” “Mike & Mike,” “NFL Live,” “Outside the Lines” and “SportsNation,” as well as a special live TV edition of the “ESPN Fantasy Focus Football” podcast.

You can see the clip in the tweets below.

How did producers allow a sketch that mimics slave auctions? How can an entire network be so tone-deaf? Not cool, ESPN. You must do better. https://t.co/2jc1nlkg5X

Apologize now for doing a sketch where you auctioned a Black man off to the highest bidder. pic.twitter.com/D8SC1cjhBU

ESPN: "Let's do a Fantasy Football auction segment with all white people bidding on a black player like a slave"

The optics f*cking suck. No person who plays fantasy in America auction drafts that way.

….. that shit looked like the scene in GET OUT