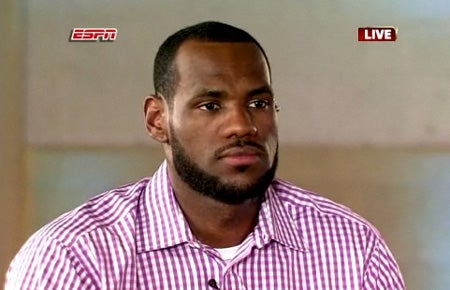 ESPN dragged it out for 28 minutes on Thursday night, wringing every last absurd drop of suspense it possibly could out of the LeBron James Free Agency Towel. In the end, James announced what ESPN’s own reporter (along with one from MSG-owned Newsday and Stephen A. Smith, who has been right all along) broke hours before: “This fall, I’m going to take my talents to South Beach.”

I wanted to give ESPN the benefit of the doubt. Yesterday, during a conference call with reporters designed to defend what little is left of the network’s editorial integrity, ESPN executive VP Norby Williamson — who cut the deal with James’ camp — said the first 15 minutes of the hour-long show would feature James' announcement. Instead, we got 28 minutes of Stuart Scott hyperbole (the worst kind) and awkward shots of James in a director’s chair in front of assembled children at a Boys & Girls Club in Greenwich, Connecticut.

“Hey, underprivileged kids sitting in the gym! LeBron's lesson for you here is this: winning is everything, and money is a close second!”

When they finally turned it over to Jim Gray — who apparently pitched the idea of a special to James’ business partner Maverick Carter and William Morris Endeavor Agency co-chief Ari Emanuel, whose agency doesn’t even represent James (that would be CAA) — his first question for LeBron was this:

That, followed by, inexplicably, what should have been follow-ups after LeBron announced his decision ("When did you decide?" or "When was the last time you changed your mind?"). Oh, and I'm forgetting this Gray-lobbed gem: “Are you still a nail biter?”

ESPN should be ashamed of themselves.

I’m still not entirely sure how this isn’t textbook checkbook journalism. In lieu of an hour’s worth of primetime ads, ESPN allowed the James camp to donate the revenue to the Boys & Girls Clubs of America – a check he could’ve easily written himself without the pomp and circumstance of “The Decision.” (That check apparently went to Miami's W Hotel for a block of cabanas.) ESPN indirectly donated ad revenue to secure an exclusive with James. That's what this looks like to me.

Here’s a sample question from Scott's "extensive" interview (paraphrasing, as I was having a journalistic credibility seizure at this point): "LeBron, how long do you think you could last in a game of H-O-R-S-E with President Obama?"

Oh, and another, late in the broadcast:

“LeBron, you said you had something else to announce. What’s up?”

Another decision we already knew: the proceeds from “The Decision” will go to the charity, James said.

Spare us all next time.

UPDATE: Williamson responded to some of the above criticism after the show: "Our plan was to go to the announcement within the first 15 minutes. It turned out the LeBron interview began 22 minutes into the live show. The larger point I was trying to make is that the news would be presented within the first part of the program, to allow for analysis and perspective on the front and back end of the announcement. I think we accomplished that despite the fact that my prediction was a little off."