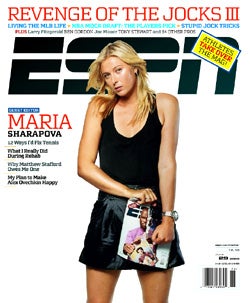 The numbers are hard to fathom. According to the Audit Bureau of Circulations, a staggering 75 percent of consumer magazines saw their single-copy sales decline between June and December of 2008 — the most recent industry-wide stats available.

Advertising pages, meanwhile, plummeted 28 percent during the first half of the year, representing roughly $2.5 billion in lost revenue. (In fact, of the 243 magazines tracked by the Publishers Information Bureau, just 12 managed to increase their ad pages.)

There’s no question the magazine industry has taken a beating the last few years.

The recession hasn’t helped, but a few smart people in the magazine industry argue that publishers, in offering dirt-cheap subscriptions that effectively devalue the product they produce every month, have brought some of this on themselves.

As CNBC noted this week, ESPN The Magazine is offering its 2 million subscribers the chance to extend their subscriptions for a year for $1 (which happens to be the price that TV Guide was sold for last year).

For a buck, current subscribers get 25 issues of the magazine — that’s 4 cents an issue — as well as access to the Insider, ESPN’s premium online content. (ESPN’s own ad pages were down 24 percent during the first half, while its paid circulation was flat during the last six months of 2008.)

Gary Hoenig, the magazine’s general manager, told CNBC that getting its subscribers to sample their premium content is the primary goal of this offer.

But isn’t it inherently devaluing “The Magazine” at the same time?

"It’s a smart question, and the answer is complicated,” Hoenig told me. “Many magazine subscribers come in through similar offers, through outside agents, and in many cases, the subscribers are ‘paying’ with credit card miles or award programs or other incentive programs. It’s our job in this business to sell them up. Anybody in the magazine business who works in circulation promotion knows this.”

But some argue that the industry’s business model is broken. One of those is Ole Miss professor Samir  (“Mr. Magazine”) Husni, who has become something of a preacher on the subject.

“Magazines that continue to offer second-to-nothing subscription prices are not doing themselves any favors,” Husni said. “Although some are quick to add that those special offers, especially when using credit cards and automatic renewal, have a much higher renewal rate and that’s what they are counting on.” (Indeed, that’s what Koenig told CNBC.)

“My take on the issue is that it is going to take some time to increase the subscription prices since it is going to take some time to clean the inflated subscription lists we currently have,” Husni said. “Step number one should be getting rid of the guaranteed rate base and have an audit after the fact not before.  As long as we have a rate base before we even publish a magazine we are going to be in the business of counting customers … That is the reason I call this practice publishing suicide.”

That makes for a nice blog headline, but “suicide” seems a bit strong. What ESPN is doing here, though, does give the impression — to mix sports metaphors — of a desperate, Hail Mary heave at the buzzer.

Hoenig disagrees: “Remember Publisher’s Clearinghouse? This offer is no different, save that our success rate with a credit card on file and a good product has been very high, much higher than with the kinds of offers I’ve just described, and that this offer is only going to current subscribers, not to non-subscribers. So the notion of ‘devaluing’ the magazine with this offer or any offer is irrelevant, because magazine subs have never been sold at the same rate to everyone always."