Both ESPN and Cablevision/Madison Square Garden-owned Newsday are reporting that James will likely announce that he is signing with the Miami Heat tonight on ESPN’s hastily-produced, “Bachelor”-like primetime special, “The Decision.”

That ESPN is breaking news that could cannibalize the suspense of the broadcast is surprising, considering some critics (myself included) figured they’d do their best to keep LeBron’s decision under wraps before 9 p.m.’s “Decision.” (My guess is ESPN has been so browbeaten over its decision to cut a television deal with James, it is not restricting its reporters out of fear of that leaking, too.)

That Newsday is reporting LeBron-to-Miami news isn’t surprising, considering the paper is owned by James Dolan, who also owns the New York Knicks and was active in the James sweepstakes. If James has indeed decided to scorn the Knicks and Dolan, he’d have a reason to leak the news to one of his paper’s reporters. 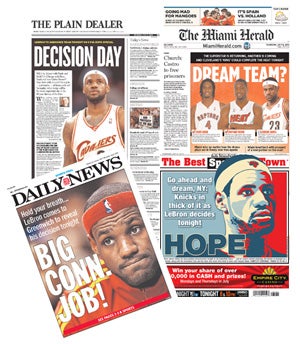