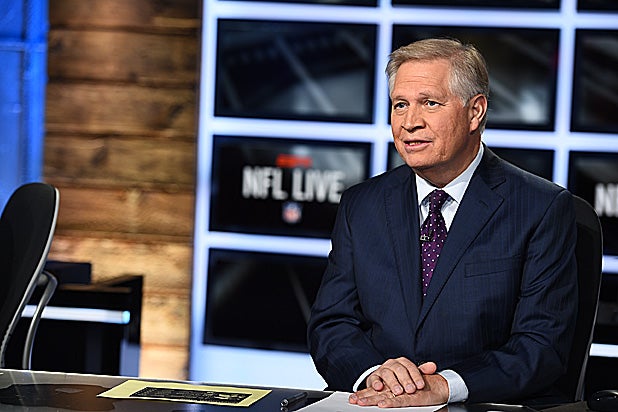 ESPN NFL analyst Chris Mortensen will be taking leave from the sports network to get treatment for throat cancer.

“More than a week ago, I was diagnosed with a Stage IV throat cancer,” Mortensen said in a statement Friday on ESPN.com. “My focus shifted significantly to gathering information about the specifics of this cancer. The initial diagnosis was confirmed Friday and there is another test remaining that will determine the best possible treatment plan that will commence in the very immediate future.

“Consequently, with the support and encouragement from ESPN president John Skipper and many others at ESPN, I am temporarily stepping away from my normal NFL coverage duties to better engage this opportunity to fight the good fight that is projected to affect almost 1.7 million Americans with new cases in 2016,” he said.

“I have many inspirational examples of men, women and children who have faced this very fight. We all know somebody, right? I also have the love and prayers of my wife Micki, my family, my friends, colleagues and, most of all, my faith that serve as sources of tremendous strength. I have a peace about this and look forward to the battle,” Mortensen continued.

ESPN president John Skipper pledged his support of Mortensen on Friday, saying in a statement, “Our thoughts are with Chris and his family as he faces this challenge. He is an extremely respected colleague, who has the complete support of his entire ESPN family. We wish him strength and hope in the battle ahead and look forward to his return whenever he chooses.”

The 64-year-old sportscaster has been with the network since 1991. After growing up in Torrance, California, Mortensen served two years in the Army during the Vietnam War. Then, he worked at several newspapers, including the Atlanta Journal-Constitution, where he was an investigative reporter and covered the Atlanta Braves, Atlanta Falcons and NFL.

Mortensen has received 18 awards in journalism over the years and has been nominated for two Pulitzer Prizes. In 1978, he won the National Headliner Award for Investigative Reporting in all categories.

During his high profile career at ESPN, Mortensen has reported for the network’s Emmy Award-winning programs “NFL GameDay,” “NFL Countdown,” “Sunday NFL Countdown” and the “Outside the Lines.” He has also worked as an analyst for ESPN’s coverage of the NFL Draft.

On Fridays during the fall, Mortensen co-hosts a two-hour national NFL show on ESPN Radio, where he is joined by Mike Tirico and Keyshawn Johnson, and his work also regularly appears on ESPN.com.

Mortensen’s leave comes during the busiest time of the year for the NFL, heading into the divisional playoff weekend and less than a month before Super Bowl 50 on Feb. 7.  The analyst has covered every Super Bowl since 1979.