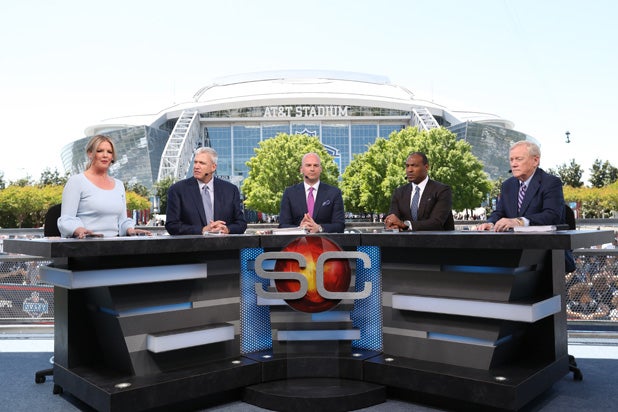 ESPN opened its presentation by welcoming its new president Jimmy Pitaro… at least that was what was announced until Kenny Mayne showed up instead, proclaiming “all the money deals go through me now.” (Pitaro did come out eventually.)

ESPN’s upfront presentation to advertisers featured the usual cadre of sports stars (though fewer than in past years) and ESPN personalities, including the new “Monday Night Football” team (with a cameo from Jerry Jones), Kobe Bryant, Alex Rodriguez and Stephen A. Smith.

Read on below for four things we observed from Broadway, and we’ll see you ABC later today.

Pitaro came out with a good opener after he got Mayne off the stage. “I honestly have no idea what the hell Kenny does other than this upfront thing.” He spent the rest of his stage time sticking to the typical remarks you would expect to hear from a network president this week, touting the strength of ESPN and how they have the ability to reach sports fans everywhere.

Pitaro, a longtime Disney executive who took over as president earlier this year after longtime boss John Skipper’s abrupt exit, at least genuinely seemed happy to be there, proclaiming he “was already a life-long fan” of ESPN.

2. Don’t Put ‘SportsCenter’ in the Graveyard Just Yet

ESPN spent a lot of time during the upfront touting the continued relevance of one of its most famous brands: “SportsCenter.” As midnight host, Scott Van Pelt put it: “We remain and we’ve always been the show of record… the TV graveyard is littered with shows that tried to followed us. Like Omar on ‘The Wire’ said: ‘You come at the king you best not miss.'”

However, he added that Omar, unfortunately, ended up dead. “Very, very dead.” Which is why ESPN spent a lot of talk about how they’re reinventing “SportsCenter” for the digital age, including Katie Nolan’s version of the show on Snapchat.

3. Mascots try to pump up a morning crowd

ESPN’s upfront can always claim to feature something that none of the other networks presenting this week can: Mascots. The Philadelphia Eagles’ mascot Swoop could be forgiven he was strutting around a bit, still riding the wave of the franchise’s first Super Bowl title.

4. Kenny Mayne Is So Done With This

While Jimmy Kimmel is rightly the star of ABC’s upfront week, Kenny Mayne continues to be the week’s best kept secret. After coming on stage wearing a large white robe (and being referred to as “The Peaceful Moonchild of the Astral Plane and Wavemaker of the Saffron Sky Daydream the Silver Coyote”), the veteran sports journalist said what many of the talent (and probably some executives) wish they could say: “I’m tired of doing this.”

After trying out some hot yoga (seriously), he had epiphany that even Don Draper could appreciate: “I looked in the perfect creation before me, and I envisioned how 30-second spots could be repurposed into 15 seconds.” Five minutes later: “All right, yoga sucks.”

Mayne had some industry-related quips, including how “skinny bundles don’t actually make you skinny, advertising on ‘Monday Night Football’ does that” and asking a question even many in the ad industry can’t fully answer: “What the hell is programmatic anyway?”

The rest of his short bit featured money being shot out of cannons (“That cost $1,700”), and a closing line that could honestly be a mantra for the entire TV industry: “I don’t know how the hell we’re going to do it, but I’ll be working on it.”