“The best part about this event is that everyone is amazing. It’s not an overstatement, it is truly the case because they all have their own personal story,” Champion (pictured above) told TheWrap at the sixth annual gathering in Dana Point, California. “There is always someone that you can relate to.

“For me, that’s inspiring because I get caught up in perhaps whether my gender or race will define if I am going to be accepted,” she said. “There are so many people here you can learn from and they are doing so much good in the world.”

Having made the big leap in her own career from “First Take” host to “SportsCenter” anchor in July, Champion revealed: “At the end of the day, race and gender don’t get you the job — your talent and worth have to speak for themselves.”

After making history earlier this month by becoming the first woman to broadcast a nationally televised postseason MLB game, Mendoza was also on hand to help support other trailblazing women.

“What I find is true to every Summit is that I connect with everyone on a much deeper level. We talk about things that aren’t appropriate in any other world,” she told TheWrap.

As for the response to her joining the booth as a regular analyst on ESPN’s “Sunday Night Baseball” following Curt Schilling’s suspension, Mendoza said: “It’s been crazy. I was aware that it would be a huge responsibility and there would be a reaction — but the kind of reaction and the amount was not what I expected.”

While she tries to stay away from both the extremely positive and the extremely negative responses (especially on social media) from “the people who matter the most, it has been very positive,” Mendoza said, adding that she hopes her new role “opens up peoples’ minds that there’s nothing that should be gender specific. This is 2015, it should not be about whether you are a woman or not.” 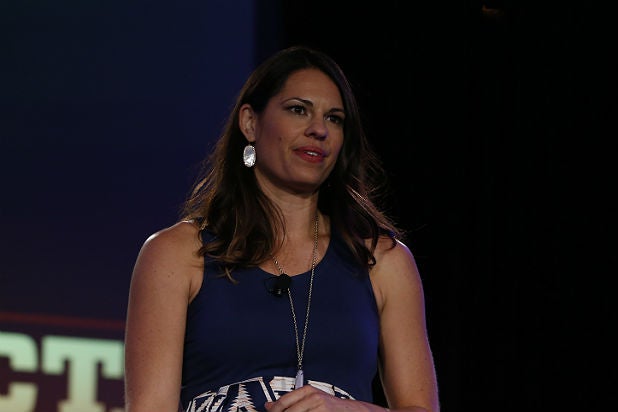 Other inspiring women speaking at the espnW Summit included Katie Hnida, a former college football place-kicker who spoke out about sexual assault on college campuses, which is an issue highlighted in the Sundance documentary “The Hunting Ground.” Hnida shared her own personal experience about being raped by a teammate at the University of Colorado in 2000.

“You feel so much shame and a stigma following sexual violence,” she said, revealing that she received graphic threats after going public about the rape. “It is a tough thing because you are re-traumatized so many times. Rape is the only crime where the victim is put on trial.”

Motivational speaker Lizzie Velásquez, who suffers from a rare congenital disease that impedes her from accumulating body fat, got a standing ovation from the audience when she shared her story of being trolled on the Internet.

“When I was 17, I found a video labeling me the world’s ugliest woman on YouTube. It made my confidence go down to zero within seconds,” she revealed.

Her struggle to overcome the prejudice of people who said the world would be better off without her in it was recently captured in the documentary “A Brave Heart: The Lizzie Velasquez Story,” which premiered at SXSW in March.