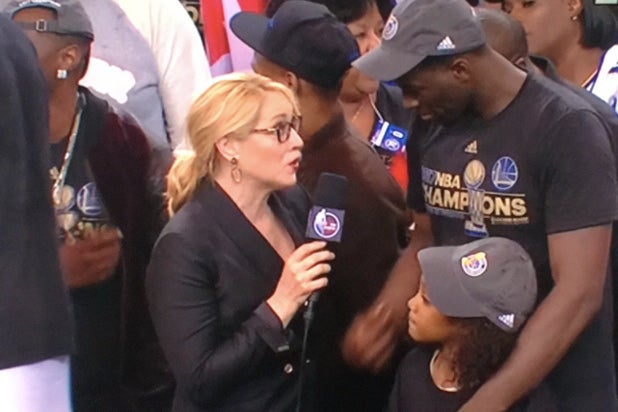 There was no doubting the brilliance of the Golden State Warriors on Monday night as they took home their second NBA Championship in three years with a solid defeat of the Cleveland Cavaliers.

And while top-scorers Kevin Durant and Stephen Curry were heaped with praise on social media after 5 victory, there was one person not wearing a Warriors jersey winning the night: ESPN reporter Doris Burke.

The NBA analyst had the lofty responsibility of handling the NBA trophy presentation and post-game interviews on the court following the 129-120 victory by the Warriors, and it won her even more fans that Durant’s MVP-performance.

The 51-year-old sportscaster and sideline reporter took over the role that traditionally belonged to the late, great Stuart Scott — who lost his battle with cancer in January 2015 — and boy did she live up to his legacy.

Burke even earned praise from former ESPN staffer-turned-Fox Sports host Jason Whitlock, who described her the “best in the business.”

Other Twitter users called for her to be voted MVP, while one basketball fan is suggested that Burke should be the next president. Now there’s an idea!

“KD’s mom, Riley Curry and Doris Burke should team up and do… I don’t know exactly what, but definitely something. Crime fighting, maybe?” another user wrote.

One player who didn’t get to be interviewed by Burke after on Monday night at Oracle Arena in Oakland, California, was LeBron James as his team failed to reclaim the NBA Championship they won in 2016. He did have plenty of other reporters want to speak with in the post-game press conference at least.

See some of the best tweets about Burke below.

Not gonna lie. I didn't watch A SINGLE MINUTE of game 5. I only turned it on when it was over to see how I can learn from Doris Burke.

Doris Burke is the best in the business. Just a tremendous job with this postgame.

Doris Burke does an amazing job in post game #NBAFinals ceremony, a role her predecessor Stuart Scott also savored. Thinking of him pic.twitter.com/B214NlvVrH

Doris Burke doing fine job but every time I see this trophy presentation I think of how very much @StuartScott loved doing it.

Doris Burke putting on a clinic out there.

I know it's not rocket science, but Doris Burke just made something that is actually really difficult and awkward look easy and comfortable.

Conducting several live interviews during an on-stage celebration is chaotic and awkward. Doris Burke made it look smooth and seamless.

KD's mom, Riley Curry and Doris Burke should team up and do… I don't know exactly what, but definitely something. Crime fighting, maybe?

Want to draw your attention back to the best handling of an NBA coach ever by Ms. Doris Burke. pic.twitter.com/JgDxoYTnVE

Come to think of it, why don't we hear @heydb Doris Burke mentioned more often as one of the elite of sports journalism, period?

How do I marry Doris Burke?

Love Doris Burke. Stayed at the hotel. She was delightful! @ESPNNBA Great ambassador for the @ESPNNBA https://t.co/sb8kMJkINL

My timeline is completely full of @heydb love. For once, Twitter is ????.

Glad Doris Burke is getting love on #Twitter.
She's one of the best prepared, most knowledgeable #NBA analysts going.
STELLAR.#NBAFinals

Woman crush everyday: Doris Burke. Articulate, insightful, and effortless. One of the best in the biz, and raises the bar every year

Doris Burke is the Meryl Streep of sports broadcasting #NBAFinals