Qerim will expand her profile by appearing on Mike Greenberg and Mike Golic’s weekday morning show on ESPN2 during its final two hours from 8 a.m. to 10 a.m. ET before then heading to “First Take.”

“Mike & Mike,” which has been on the air since October 1998, will also be moving into a new Bristol, Connecticut, studio on Feb. 8, the day after Super Bowl 50.

“I was originally going to join ‘Mike & Mike’ in New York City, but then that move fell through and there was a vacancy on ‘First Take,’ so now I am excited to be able to do both.”

In her new role, Qerim will focus on the hottest trending topics in sports media and will also highlight segments coming up on that day’s “First Take,” which airs afterward.

Qerim took over from Cari Champion as full-time moderator on “First Take” in September, tackling the biggest news stories of the day — and two of the most outspoken commentators on ESPN, Smith and Bayless, who are known for their passionate outbursts. 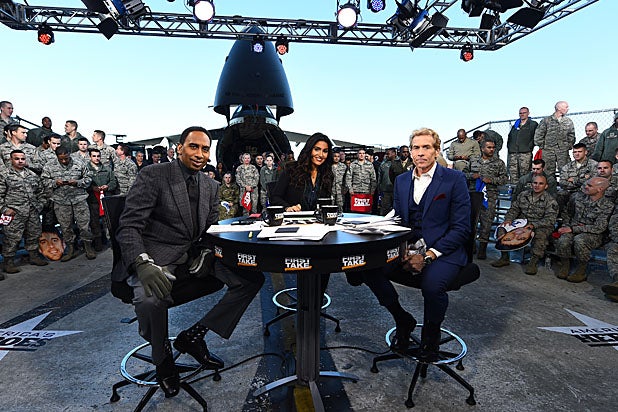 Before she started on her second gig at the network, Qerim talked to TheWrap about her current role sandwiched in between the hosts five mornings a week.

“I felt like I was on a two-month audition period with them when I was interim host after Cari left, and I wouldn’t change that for the world because I feel like I really earned the job,” she said.

“I really appreciate working with Skip and Stephen A. and value their opinions. There’s definitely been growing pains, but I know they have my best interests at heart. Sometimes I make mistakes and they tell me, but it’s tough love, and I want to hear it, and we have natural chemistry on-and-off the air.

“‘First Take’ was must-see TV for me when I worked in Los Angeles [at the NFL Network], I always started my morning watching these guys. Now, I’m up close and personal with them so it’s a little surreal,” she told TheWrap.

As for handling Smith and Bayless’ huge personalities that sometimes dominate sports-media headlines as much as the stories they are covering, Qerim said: “They’re such different personalities. And I kind of like to consider myself sort of in the middle.

“The biggest thing with the two of them that some people don’t realize is just how much fun they have. They’re absolutely hysterical,” she explained. “Sometimes the show takes a hard left turn, but I think the topic dictates the tone of the conversation — so there are a lot of serious issues, and sometimes there’s a lighthearted angle within a serious issue.

“In terms of keeping them on track, that’s definitely part of the role of keeping the conversation moving, but it can be hard to cut them off for commercial breaks sometimes.”

Neither commentator has been without controversy. Smith was suspended by ESPN for a week in July 2014 for remarks he made about women during the Ray Rice domestic abuse scandal. Bayless infamously got into a heated standoff with Seattle Seahawks cornerback Richard Sherman in 2013.

“One thing that I think is important for everybody to realize is they’re not saying things as click bait or just to say it,” Qerim explained. “They vehemently believe whatever they say.

“So sometimes both of them think that the other person’s take is absolutely ridiculous, but they are truly issues that they don’t agree on. I used to think that they manufactured some of the debates — which they do not. I figured they couldn’t truly believe some of their takes — but they do,” she confirmed.