There were two big announcements from ESPN on Tuesday, and both of them were good news for their current stable of on-air talent.

First up, ESPN2’s “His & Hers” anchors Jemele Hill and Michael Smith will now take over the 6 p.m. ET segment of “SportsCenter,” in place of Lindsay Czarniak, who is going on maternity leave in November.

The popular pair, who have been longtime contributors at ESPN, will take over their new roles on Feb. 6, 2017, the day after Super Bowl LI is played in Houston.

Before then, the 6 p.m. program will be hosted by Zubin Mehenti, Matt Barrie and other current “SportsCenter” anchors in Czarniak’s absence.

“Jemele and Michael have unique chemistry and impressive journalistic credentials, and we look forward to bringing their entertaining mix of perspective and passion to ‘SportsCenter,'” Rob King, ESPN senior vice president, SportsCenter and News, said in a statement Tuesday. “Just as we did with the one and only Scott Van Pelt, we’ll build a new version of our program that amplifies all that makes them special. This is another major step in the evolution of ‘SportsCenter,'” he added.

“This is just surreal for both of us,” Hill continued. “For us to be associated with the cornerstone brand of ESPN is beyond thrilling. There is such a rich history and tradition associated with ‘SportsCenter’ that it’s a little overwhelming, but we’re eager to leave our own mark.” 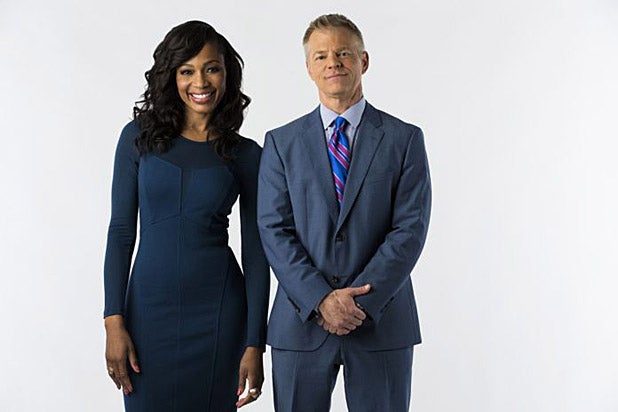 Meanwhile over in Los Angeles, Cari Champion (above with David Lloyd) has signed a new, multi-year deal to remain with ESPN as co-anchor of the 11 a.m. ET “Coast to Coast” edition of “SportsCenter,” the network announced. Champion will also continue as a contributor to espnW, which included her “Be Honest With Cari Champion” podcast.

Both Champion and Hill will be taking part in espnW’s annual Women + Sports Summit in Laguna, California, later this week.