There are no gimmes in the world of sports or television, but Mike Greenberg believes his new ESPN morning show “Get Up!” has a pretty good shot at success.

After 18 years co-hosting “Mike and Mike,” Greenberg is set for a new challenge, this time with Jalen Rose and Michelle Beadle as his wing people and ESPN/ABC veteran Bill Wolff as executive producer.

“I couldn’t be more excited… I think we are a decent roll of the dice and with our combined experience and expertise, the four of us are a good bet,” Greeny told TheWrap in a recent interview.

Premiering Monday, April 2 at 7 a.m. ET on ESPN, “Get Up!” marks Greeny’s first full-time on-air gig since parting ways with Mike Golic last November. And while he’s eager to get back to work, the longtime sportscaster made the most of his extended vacation.

“I thought I would really miss the platform and the opportunity to go on and opine about stuff, but it has been a really nice time. Who gets the opportunity in the middle of their career to take this much time off without it being a bad thing?” he asked rhetorically.

In fact, the break “has given me a totally renewed view of what I do. I sit back and consume sports like other people do, I watch it differently as I am not just thinking what I am going to say about it the next morning at 6 a.m.,” Greeny said. “I hope it makes me better at my job. When you’ve done something as long as I’ve been doing this job, I think it’s a mistake to assume you know it all — you’re always evolving and getting better.”

Another big change is the location, with Greeny moving from working at ESPN’s famed Bristol, Connecticut, campus to a shiny new Seaport studio in lower Manhattan. “The look of it will be different to what almost anyone is doing at ESPN or otherwise, but the biggest consequence will be our proximity to people in the world,” he said, stressing the challenge of getting guests to remote Bristol.

“We will have an opportunity to get people to do things with us — you’ll see different faces, different voices. I am a native New Yorker so I do hope some of that energy rubs off,” he added.

The pièce de résistance to the 21,000-square studio is the sprawling rooftop boasting views of the Brooklyn Bridge and the Statue of Liberty. “Bill and I were debating how far it is across to Brooklyn and could [MLB star] Giancarlo Stanton hit a baseball across, could Dustin Johnson hit a golf ball? I can tell you right now, we’re going to find out,” the golf fanatic promised.

“We’ve talked about having college basketball games up there or professional boxing, which ESPN is jumping into in a big way. A fight on our rooftop would be spectacular, you could put thousands of people up there to watch.”

While “Get Up!” shares a similar morning time slot to “Mike and Mike,” it’s going to feel very different, Greeny told TheWrap.

“Overwhelmingly, the biggest difference is that we will be a television show, so we will have the luxury of presenting things in a way that we weren’t able to do on ‘Mike and Mike.’ A huge part of that audience was on the radio so now we will have a lot more video, plain and simple,” he explained. 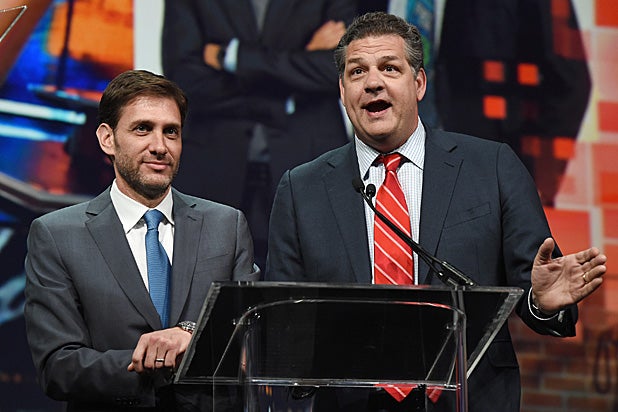 After two decades of watching Golic (above right) eat donuts on set, Greeny now has a new dream team with Rose and Beadle. “Literally from the very first day of planning, I said: ‘you’ve got to get me Jalen,'” he explained. “Then as we were going through the process of who else, Bill said, ‘how about Beadle?’ I thought she was so entrenched in L.A., it wouldn’t have occurred to me that she was on the list of options. I thought if we can get her, it’s done.”

The sassy “SportsNation” and “NBA Countdown” host is now firmly on board and Greeny couldn’t sing her praises more.

“She’s the best, she is in my opinion … you could make an argument that she is the best sportscaster in America today. What doesn’t she have? She’s as smart as anybody, she’s as comfortable on the air as anybody, her presentation is as good as anyone’s, she’s as professional and opinionated as anybody, she’s as funny as anybody …” And while Beadle will no doubt bring different energy as a woman, Greeny thinks that is “less significant than just how our personalities mesh.”

“We’re all at a stage in our careers and our lives where we didn’t have to do this — we want to, we all have a vested interest in turning this show into something bigger than ourselves and that’s the first step to success,” Greeny said. “I think we have an excellent chance to have excellent chemistry.”

As for the show title “Get Up!,” the aim was to find something that was “unmemorable enough not to be a hindrance” but with a lot of subtle meanings.

“I’ve written many books and those titles are really important because a lot of people will buy a book from walking through a bookstore and seeing it on a shelf, but I don’t think people watch daily television because of the title. It doesn’t have to be memorable, it just needs to tell people what we are,” he explained. “The show is not my show, it’s not Beadle’s show, it’s not Jalen’s show, it’s our show.”

Plus, said Greenberg, “The one thing we kept saying was we didn’t want a name that people would make fun of.”

The one word that the team has repeatedly stressed about “Get Up!” is that’ll be fun. The show will dip it’s toes into the worlds of entertainment and politics but all the while focusing on sports, Greeny said, while dishing out a food analogy.

“I like a lot of different types of food, but if I feel like sushi, I’m not going to McDonald’s. So you can tip toe into other things, but for the most part our audience comes to us for sports and they have the right to expect that we’ll be covering sports better than anyone else, that’s our job,” he explained.

Also Read: Why 'Golic and Wingo' Hosts Say New ESPN Show Is 'Like Putting on a Comfy Pair of Clothes'

Of course, that doesn’t mean that huge — and often — tragic news events can be ignored, as they are “a part of your humanity. No one can ignore what happened in Vegas, we were on the air the day after September 11 … you can’t pretend those things didn’t happen,” Greeny said. “When things like that happen in the world, we do talk about them and acknowledge them, but if you’re looking for coverage of that there are a lot of other places to go that can deliver it better than we can.

“If you’re here, I have to assume it’s because you want to escape from that and hear these people talk about football. So that’s what we’re going to do, unapologetically. That is our expertise and that is our hamburgers.”

If you want to hear Greeny, Rose and Beadle talk about football — and plenty of other sports — tune into “Get Up!” Monday, April 2 at 7 a.m. ET on ESPN.