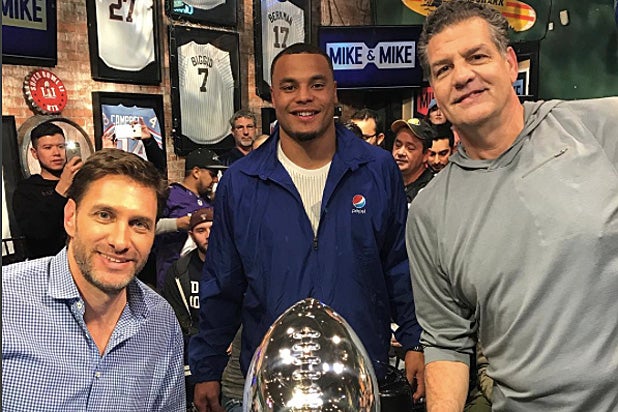 You’d think that after over 16 years hosting ESPN’s “Mike & Mike” together, that Mike Greenberg and Mike Golic would have seen it all … well they may have now.

TheWrap joined the hosts of ESPN Radio’s hit weekday morning show on their set at Lucky’s Pub in Houston ahead of Super Bowl LI, to get their thoughts on the big game, the Bill Belichick/Tom Brady face off, and the strangest thing they’d seen so far this week while shooting on location in a front of excited fans.

“We had a guy show up this morning dressed as the ‘puppy monkey baby’ — that was one of the sponsors last year,” Greenberg told TheWrap, clearly still traumatized by the experience. “It is exactly what you think it is  … He was wearing a diaper, a monkey suit and a dog face.

“However awful that sounds, it was worse. He was the first person to walk in at 4.30 a.m., thankfully he was the only one dressed like that,” Greeny added.

“Luckily he was sober too,” Golic chipped in. Well, that’s a relief at least.

“Mike & Mike” have had a revolving door of far more serious guests at their temporary home since Monday, however, with Dallas Cowboys rookie QB Dak Prescott (pictured above) making a deep impression on the pair.

“The electricity in the room when he walked in was outstanding,” Greenberg said, full of praise for Tony Romo’s stand-in this season. “He also had the most interesting season in the NFL of anyone this year. Maybe even in recent memory —  he is terrific, and when you sit with him, you can see why. He has a great poise and is going to have a great career.”

Also Read: Inside ESPN's Super Bowl Coverage: From Rex Ryan and Odell Beckham Jr, to the Patriots and Politics

"It's all about my teammates, the coaches, the o-line, guys like Zeke, Dez and Witten, they made my job easier."@DallasCowboys QB @Dak pic.twitter.com/ZJQV8Bh7BY

“I like it when athletes get known for something else. We know what they do on the field but its about what they do off the field,” Golic said. “Too much of the news is the bad headlines and there’s way more guys in the league that are doing good. When you can say they are a better person than a player, that’s a good legacy. Larry is one of the great ones.”

"98% of the things he does is perfect. There's the antics off the field but that's football. He's figuring it out."

But what about those guys who are actually playing on Sunday? The question “who is going to win?” has been worn very thin by the end of Super Bowl media week, but it’s still a valid one right up until the end of the fourth quarter.

And with like so many things in life, the Mikes are deeply divided.

“I think New England going to win,” Greenberg predicted, “and to me what is most interesting is in era when the physicality of football is deemphasized, I have come to appreciate the chess game of it more and more.

“This Atlanta offense has been so good — I am fascinated to see what Bill Belichick has in store for them. He is the best coach in my opinion ever, I think that while Brady is also the best quarterback ever, this game comes down to ‘does Belichick devise something that slows Atlanta?’

“You can’t beat a team if you can’t stop them. What is it that Belichick comes up with that slows Atlanta for Brady to win it? And I think he will, but I have no idea what it is he’ll do,” Greeny said, letting the football fan in him slip past the broadcast professional.

Meanwhile, Golic is predicting the Falcons will take home their first Super Bowl win in franchise history. “To me [the deciding factor] is the back field for both teams — Lewis and White for New England, Coleman and Freeman for Atlanta — and the mismatches they make,” he said. “I know we’ve got Brady and Matt Ryan at QB, but for me as an analyst, it’s about the backs. I think Atlanta is going to win. They’re too offensively powerful.”

One thing the Mikes do agree on (finally!) is how smoothly things have gone so far in Houston.

“It is so hard to compare one Super Bowl against another,” Greenberg said. “It is a great venue, the city has done a terrific job, the people have been enthusiastic. But the real way to judge a Super Bowl is after has been played. As a Super Bowl city, Houston has been fantastic.

Golic continued, “One of the ways we look at it is how does it affect our week? Can you move around — from that stand point it has been fantastic. You’re also a slave to the weather, back in Dallas there was a horrible snow storm that we didn’t expect, that’s stuff you can’t control. Indy got lucky with good weather, New York got unbelievably good weather, we were expecting it to be the first cold Super Bowl but it wasn’t — and Houston has been warm so far.”

We won’t know ’til Sunday night whether this Super Bowl will end up historical or be forgotten in a few years, and a lot of that depends on the final score.

“You can hope it will go down for the ages, but you can never predict that. I remember when Denver played Seattle and it was that great Seattle defense against Peyton Manning and the Denver offense and I thought it was going to be the greatest game ever — and it was 43-8,” Greenberg lamented.

While a blowout victory might be welcomed by the fans of the winning team, it’s not fun for viewers or host network Fox.

That and many other questions will be answered on Sunday when Super Bowl LI kicks off at 3:30 p.m. PT from NRG Stadium in Houston.

Be sure to tune into “Mike & Mike” Monday morning (6-10 a.m. ET) on ESPN2 for all their colorful post-game commentary. The show is also available on ESPN Radio, ESPNradio.com, ESPN app, SiriusXM and ESPN affiliates across the country.