Wednesday night was historic for the NBA fans in many, many ways.

Not only did Kobe Bryant play his last game for the Los Angeles Lakers after an iconic 20-year career, the Golden State Warriors won their 73rd game to become all-time winningest team for one season.

But according to ESPN host Rachel Nichols, the biggest surprise may have been the fact that Kanye West got “out-celebritied” for Bryant’s final game, forced to sit in (gasp!) the third row at the Staples Center.

TheWrap caught up with Nichols on the set of her new NBA show “The Jump” to get her takeaways on basketball’s big night.

1. A perfectly scripted send-off for Kobe
Just like a Hollywood blockbuster, a great game “is like a story with heroes, villains and conflict. Then it is solved at the end, which is much better than life, which is not usually solved,” the longtime sports reporter told TheWrap.

“So Wednesday night was such a good story. You couldn’t have written it that well. For me, it was the perfect ending for Kobe.”

2. Why the Lakers’ disastrous season didn’t matter in the end
While the Lakers beat the Jazz Wednesday, the team still ended the season 17-65, landing at the bottom on the Western conference and marking their worst record in team history. But none of that mattered when it came to sealing Bryant’s legacy.

“In sports, we have so much of a bias that the perfect ending has to be winning the championship and walking off the field or court victorious. For me, Kobe’s ending hitting 60 points and taking countless shots was perfectly Kobe,” Nichols said. Throughout his career, she said, “he always wanted the ball and always pushed it further than he should. And that’s what we saw Wednesday night.”

As for the Jazz, they found out just before tip-off that they had been eliminated from the playoffs due to the Houston Rockets beating the Sacramento Kings to nab the last spot in the West, which “must have left them feeling a little deflated,” Nichols observed. 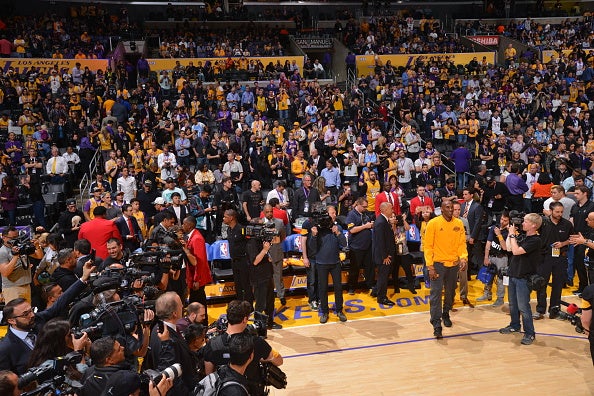 3. Even Kanye West didn’t have the best seat in the house
Courtside seats beformove back. “I saw Kanye West sitting in the third row,” Nichols said. “I thought, ‘We have finally found something too expensive for Kanye!’ Apparently somebody else out-celebritied him.”

4. At 37, Kobe proved he still had it in him
After winning five NBA championships and earning 18 All-Star appearances, Bryant has had a rough couple of years with injuries like a torn Achilles tendon, torn rotator cuff, back pain and an injured right shoulder. But that didn’t stop him from making 50 shots during his triumphant farewell — a feat many doubted he was still capable of.

“The most surprising thing was that he could pull it off physically, as this was a player that a couple of weeks ago had to ask outn ice packs, ACE bandages and held together with rubber bands.

“But Kobe made his career out of physically pushing himself, so I was not that surprised.” 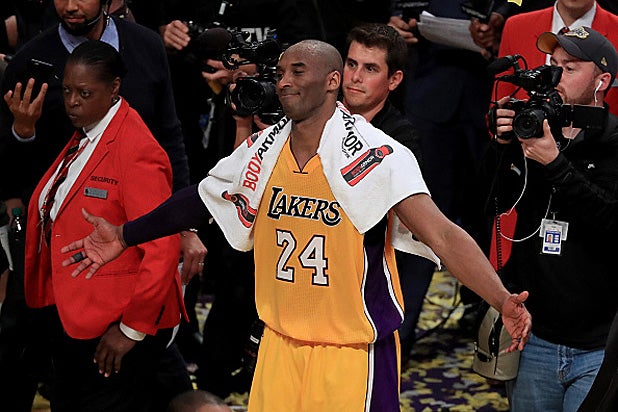 5Love him or hate him, everyone got emotional
“Kobe has been a marker or a milestone for many basketball fans — the fact that his era is ending is emotional for everyone, whether you loved him or hated him,” Nichols explained, and even the most anti-Lakers people out there “have to let that hatred go.”

Like Michael Jordan, Bryant had a reputation for a mean steak both. Is it time to root for the good guy now? “Stephen Curry is the nicest guy you will ever meet, but that does not mean he isn’t determined and is a pit bull on the court,” she said. 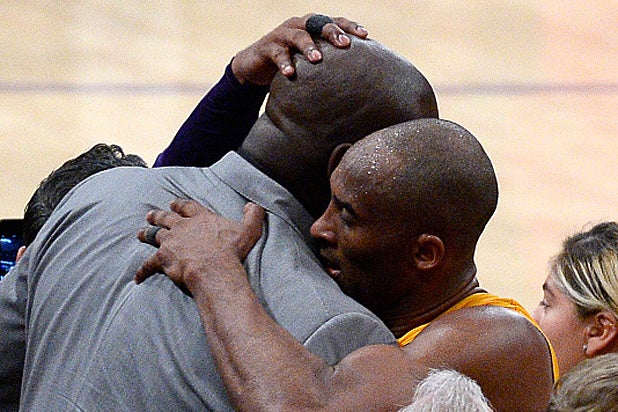 6. He made up with past rivals
The Kobe-Shaq feud has been well-documented over the years, with O’Neal demanding to be traded in 2004 (landing with the Miami Heat) after accusing Bryant of being a “selfish player.”

However, Shaq was a 7-foot-tall presence at Wednesday’s game, during which he told Nichols: “I challenged him to get 50 points and the motherfucker got 60!”

Nichols noted that Bryant had reached out to players like O’Neal in recent years to mend fences. “Kobe has been more generous in his final years, we have seen him approach people and former teammates that he wasn’t so generous with and extend those olive branches. As time passes, time heals,” she said. “Something that seemed really important like a sour word or even a punch 10 years ago doesn’t feel as big a deal now.”

7. The billion-dollar question is: What will the Black Mamba do now?
A lazy retirement does not seem likely. ESPN’s Ramona Shelburne reported that by 8:30 a.m. on Thursday, Kobe had gone to the gym, to church and to his production company.

“He is more prepared for life after basketball than Michael Jordan or some of the other players we’ve seen retire because he did have these vicious injuries over the last few years,” Nichols said. “He had plenty of time sitting around to think about it, he made a movie while he was injured. He said he wants to be a storyteller. I think he will miss basketball a lot, but he has put down the railroad tracks for his next life.”