The annual gathering of the world's female athletes, leaders in the sports world and industry influencers spent two days this week discussing not only topics central to the sports world, but also those central to today's current and cultural environment.

ESPN talent including Summit host Sage Steele, Cari Champion, Jemele Hill (who recently sparred with President Trump on Twitter), Hannah Storm, Kate Fagan and Alyssa Roenigk took part in the panels, while even a few lucky men such as Connor Schell -- ESPN Executive Vice President, Content and executive producer on the Oscar-winning "O.J.: Made in America" 30 for 30 film -- were in attendance. 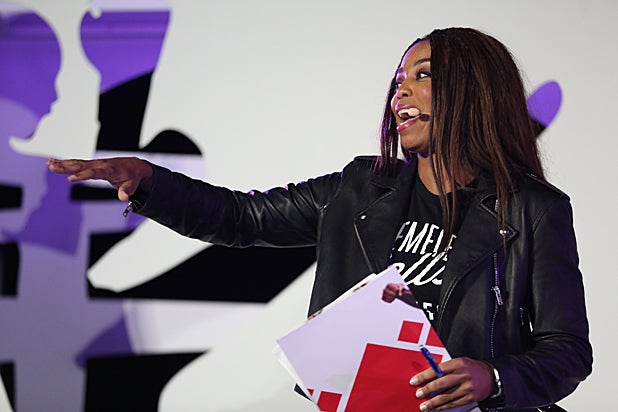 While the theme of the event has always been that of celebration, the Summit began the day after the horrific Las Vegas shooting massacre, just over a week after NFL protests and players clashing with Trump, and during the most divisive year in politics that most of us can remember -- none of which could be ignored or overlooked but certainly didn't overshadow the positivity spilling from the stage.

"I think we always bring great optimism to this event, and sometimes you need optimism more when things are really tough," Laura Gentile, senior vice president, espnW and Women's Initiatives, told TheWrap, on opening night. "It seems like this year, there's been one hit after another and so the optimism we've tried to capture and bring to the attendees is really important. They want to keep their heads on straight, think about the future and about how we can promote positivity.

"The reality is that cultural and societal issues collide with sports all the time so I think we've really tried to handle it [both at the Summit and on espnW.com] with great professionalism and maturity," Gentile said. "To focus on how it affects the sports world and how it is affecting women in sports, specifically. But I think we always veer towards just telling really good stories," she added.

While the national anthem protests by male sports stars have dominated the news lately, "We've been looking at it a lot through what some of the top female athletes have been doing," she explained. "We looked a lot at what the WNBA was doing, of them showing unity -- I think they were the first female athletes to link arms, which brings a lot of positivity and unity to what's going on as opposed to continuing the divisiveness. They had a really great leadership stance on all of the tough issues that are surrounding us, so we've been trying to tell their story."

After putting "a lot of effort into planning almost every minute of the Summit," Gentile was most excited to hear Buss speak -- plus WNBA player Sue Bird and soccer star Megan Rapinoe -- but first Sheryl Crow kicked off the Summit with a moving tribute to Tom Petty the night of his death.

"She's seen the world and she's capitalized on her talents. She's had heart ache, and breast cancer, she's lived a full life so there's a lot of wisdom she's developed," Gentile said of the "If It Makes You Happy" singer. "Then her music was just the capper because she's such an incredible artistic talent."

While there were too many amazing moments from the Summit to list in full, here are some of the top thought-provoking and conversation-sparking quotes.

Sheryl Crow, Grammy-winning singer
"It's an interesting day by virtue of what is going on in the world, so it's important to bring a dialogue that's up-lifting ... What I know more than ever that if compassion isn't the basis of everything we do in life, we're missing something."

Bozoma Saint John, Uber's chief brand officer (above right with Cari Champion)
"Part of innovation is, fake it until you make it. Keep trying things, but it's not just the random trying. I got receipts. I know what in the hell I really am doing."

On being one of the few African-American women in Silicon Valley:
"I find it really difficult to maneuver, because sometimes the things that are given freely, the assumptions that are made when you're not a black woman -- the assumption that, 'Oh yeah, you got it. You've done this before.' Then you have to prove again and again and again that you actually do know it, that you've done it, it's hard not to be mad about it."

On her famous Emmys Apple Music commercial:
"The message is always try to get to the widest audience. ... As we know, there are 'niche' audiences who also need attention -- I mean, it's music, right? It's like a universal truth." 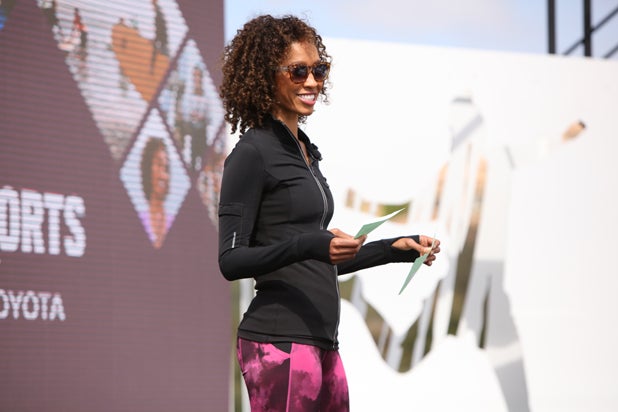 Sage Steele, "SportsCenter" anchor
"The group of powerful women that we are, we all champion diversity. And diversity includes what? Not just our identities, not just our religion, not just who we vote for -- but diversity of thought. And we've heard a ton of that over the past few days. I think we all need to remember no matter what we're doing, no matter what we're talking about -- and sometimes when we stoop to certain levels -- what are we doing?"

"We're actually becoming close-minded, and not liberal and accepting, as we preach to others that they should be. I just hope that we can remember that diversity includes everything, even different opinions."

Jeanie Buss, Controlling Owner and President of the Los Angeles Lakers
On drafting Lonzo Ball:
"I can't remember anybody with more hype going into the draft except for Magic Johnson. Now we have a kid, born and raised in Los Angeles, and that's exciting for our fans, and for us, to know that we have someone that really represents the city. It seemed like I was watching a movie. It was really special and a great opportunity for him and us."

... and his father, LaVar Ball:
"It's a joy to work with him and his family. But I won't be wearing Big Baller Brand because I have to stay neutral."

On hiring Magic Johnson:
"It was just kind of fitting that he and I would come back together. We speak the same language because we were kind of raised by the same man. We are of like mind."

Stephanie McMahon, Chief Brand Officer for WWE
"One of the reasons we've had such success is we recognize that our fans have an impact on our product. They know they are a part of our story and influence what happens in the ring."

On the Women's Evolution in the WWE:
"What shifted was how we were training and developing our female talent. Triple H started recruiting elite athletes -- men and women -- from all over the world. In our developmental system, they were stealing the show."

Rebekah Gregory, Boston Marathon bombing survivor and author of "Taking My Life Back"
"Everyone always thinks I was running in the [2013 Boston] marathon. I was on the sidelines eating chocolate covered pretzels wondering why anyone would be running 26 miles for fun."

"Not many of us will be hit with a bomb but we'll all face challenges. Standing here today, I've had 65 surgeries to repair the damage that the bomb did. Everyone is going through something ... it maybe a bad leg, it maybe a bad boyfriend."

Three-time Paralympic gold medalist Alana Nichols
"I actually had a dream of going to college on a softball scholarship, until I broke my back in a snowboarding accident when I was 17. I thought I wasn't going to be an athlete ever again. I thought it was over for me, and I had lost a huge part of my identity. It was really tough, but about two years after that I found wheelchair basketball, and that gave me my life back."

Professional show jumper Jessica Springsteen on competing equally with men
"Working with these animals, we can kind of make it an even playing field. It's fun [competing against men]. But it's funny, people will come up and ask me, 'You only ride the male horses, right? Those are the only ones who know how to jump?' And I'm like, 'Nooo.' It is so bizarre.