“Aristotle and Dante Discover the Secrets of the Universe” centers on the friendship between Aristotle “Ari” Mendoza and Dante Quintana, two Mexican American boys on the cusp of manhood who form a life-changing bond after a chance meeting at an El Paso pool in the summer of 1987. 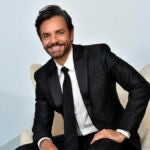 Derbez most recently played Bernardo in Apple TV+’s lauded feature CODA alongside Marlee Matlin. He can next be seen in the highly anticipated 3Pas produced projects including the critically acclaimed half-hour comedy, “Acapulco”, now streaming on Apple TV+ and The Valet, also starring Samara Weaving and Max Greenfield for Lionsgate and Hulu. Previous credits include Lionsgate’s Instructions Not Included which he also directed,and Overboard both which made a 100 million dollars at the box office.

An award-winning actress, Emmy-nominated director, producer, entrepreneur, and activist, Longoria has been leading the charge of diverse and female representation since her starring role in the hit ABC series “Desperate Housewives.” Longoria was most recently seen on the big screen in Amazon’s Emmy-nominated film “Sylvie’s Love” and Universal’s “The Boss Baby: Family Business.” Next she will be seen in Universal’s sci-fi project “War of the Worlds” and the independent film “Unplugging.” She also recently wrapped production on her feature directorial debut “Flamin’ Hot” for Searchlight.

Alberto was most recently a writer on “Duster,” from J.J. Abrams and LaToya Morgan for HBO Max and Warner Bros. TV and previously wrote on Apple TV+’s Little America.