(Warning: This post contains spoilers for Episode 105 of “Euphoria”)

“Rules” was the name on many “Euphoria” fans’ lips Sunday night — not to mention Jules and Rue’s own lips, thanks to a pair of new tattoos featuring their couple name — after the two officially became an item following the happy twist that closed last week’s episode.

That might have changed for some viewers come the end of the episode, titled “’03 Bonnie and Clyde,” however, as Jules (Hunter Schafer) looked more than a little freaked out by the pressure she feels to keep Rue (Zendaya) sober.

While “Sun Dogs” filmmaker Jennifer Morrison, who made her small-screen directorial debut with Sunday’s “Euphoria,” told TheWrap she’s shipping “Rules” just as much as you are, she can’t guarantee if the two 16-year-olds’ story will have a happy ending.

“I mean, I love them together. I want it to work out,” the “Once Upon a Time” star told TheWrap. “I was very excited that I got to have them together right after they connect at the end of the carnival episode and to be able to show them in couple mode. And I did think it was really interesting and honest that the writing started to look at this idea of how much pressure someone would feel if they were just suddenly in a relationship with someone that they had really strong feelings for at such a young age. But also, feeling responsible for someone’s sobriety and feeling the pressure of, ‘Oh my gosh, as long as I’m in their life, they’re healthy and they’re happy and they’re OK. But if I screw up in any way or if I do anything wrong or this doesn’t end up being right for me, their life could be on the line.'” 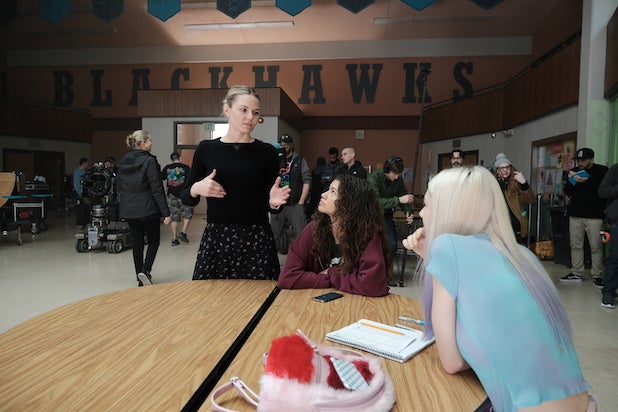 Setting aside Rue and Jules’ drama, Morrison also had the pleasure of directing the episode focused on Maddy’s (Alexa Demie) backstory and her present-day desire to keep Nate’s (Jacob Elordi) abuse literally under wraps by trying to hide the bruises on her neck from where he strangled her at the carnival. This plan doesn’t work out and she finds herself in the principal’s office, with her parents and Nate’s parents both defending their children and demanding justice.

The episode dives into Maddy’s perceptions of love due to her mother and father’s unhappy marriage and her feelings toward men, especially Nate, who she ultimately gets back together with at the end of the hour. 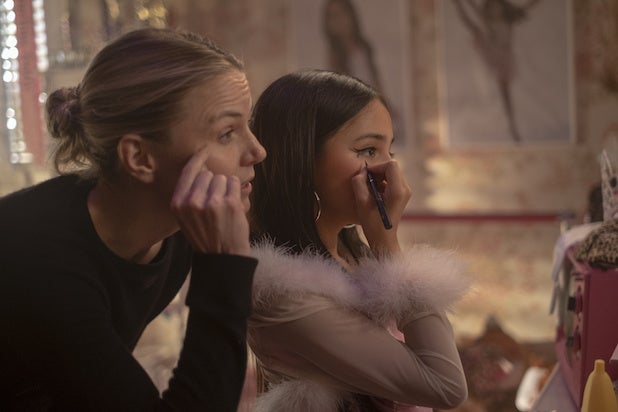 “We really wanted to show how complex and emotional this was for Maddy,” Morrison said. “And there was this anxious energy that was driving everything that was going on for her, because when you’re a kid and you know something wrong has happened and you know a person you care about could be in trouble for it, you feel really helpless. So I was constantly trying to find that balance between her determination to hide it, but also her vulnerability of what might happen if things do unravel.”

“I feel like Maddy’s backstory is really unexpected,” she added. “She’s a character that at first glance we might make a lot of assumptions about. And when you start to see how she was raised and what her backstory was and her family dynamic and see what she struggles with and see her vulnerabilities, we start to really understand her differently. I was most excited about how unexpected those elements were in her life.”

There are just a few more episodes left in the first season of “Euphoria,” created by Sam Levinson, but since the drama has already been renewed for a second by HBO, we asked Morrison if she’d return to direct again.

“Absolutely, this has been such an unbelievably special creative experience in my life,” she said. “I wish I had better words for it than that because it was life altering. Working on ‘Euphoria’ really was life-altering.”