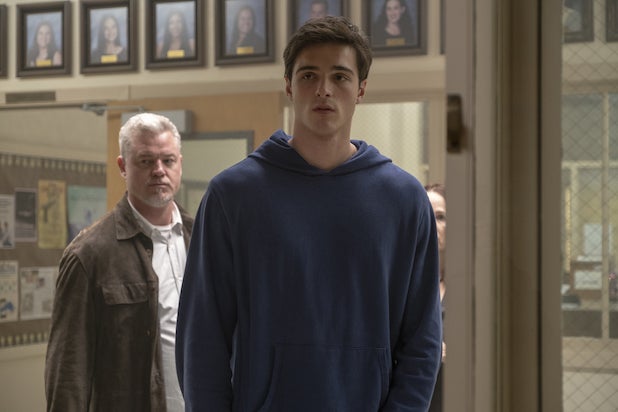 (Warning: This post contains spoilers for Episode 105 of “Euphoria”)

If you weren’t already confused about where Maddy and Nate stood before Sunday’s “Euphoria,” then you most definitely were by the end of the episode, because the hour offered more questions than answers when it comes to the teens’ complicated relationship.

The installment, which also revealed Nate and Maddy’s history, ended with the two embracing at a motel, apparently putting the dramatic ordeal behind them and attempting to be together in secret.

“I do believe he’d do anything for her,” he said. “I don’t doubt any of what they say they feel for each other in Episode 5. I think they feel like it’s them vs. the world.”

He added: “I think their focus for next week is figuring out how they can be together in a world that doesn’t want them to be, they’re going to be faced with a lot of harsh realities that will put their relationship to the test.”

The subject of whether or not Nate is gay has been brought up more than once on screen this season and Sunday’s episode raised it once more, with other students at school questioning Nate’s sexuality after his fight with Maddy. Elordi can’t tell us one way or the other, but that doesn’t mean he hasn’t put a great deal of thought into the matter.

“I have a world of thoughts on Nate’s sexuality and it’s something that I dwelled on a lot leading up to and during the show, I think he develops as a person as the series progresses,” Elordi said. “As for his sexuality, I can’t say.”

Jennifer Morrison, who directed Sunday’s “Euphoria,” told TheWrap that when she and Elordi spoke about the episode, “he talked a lot about how he feels like Nate really believes that he loves Maddy.”

“For him it’s real, in his mind he believes he loves her,” she said. “That doesn’t mean it’s healthy or he handles it right or treats her in a way that’s respectful, but based on his baggage and his damaged situation, even with all that, he really believes he loves her. So we were operating from a place that he is genuinely fighting for this relationship. I can’t speak to other episodes, but ultimately that could be him running from his sexuality that could be him numbing some of what he knows about his father or confusion. Or all of that’s mixed together. But in Episode 5, we really took the stance he was going to do whatever it takes to make it work with Maddy at this point.”

Speaking of baggage, Nate’s issues with his father, Cal (Eric Dane), are piling up as he deals with his anger over his father’s hidden sexuality — and the fact he committed statutory rape with Jules (Hunter Schafer), who Nate has threatened in order to keep her quiet. All of this might be what leads Nate back to Maddy in the end.

“Nate’s whole life he has lived with his dad’s secret and I think when we find him in the story we’re catching him at an age where he’s finally starting to confront it and question him,” Elordi told us. “I think he’s less worried about what his father thinks as he is about keeping this idea of normalcy alive. Maybe she’s even a challenge to his father in some kind of way.”