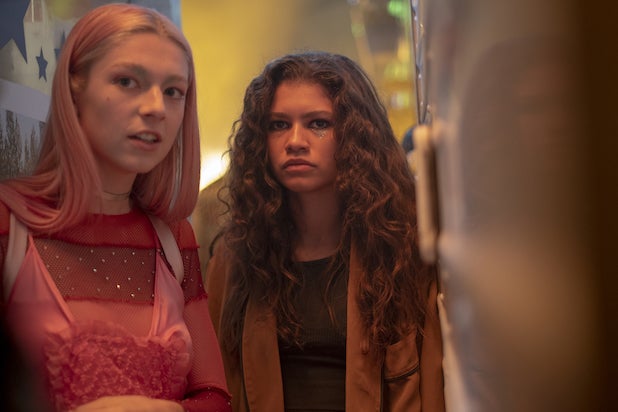 And this kiss, unlike the one from the previous episode — which was initiated by Rue and caught Jules completely off guard — was an act of mutual affection that occurred as the two 17-year-old girls held each other in Rue’s bed after an installment packed with trauma, both in the past and present.

But what does this mean for the BFFs — and possibly lovers — going forward, seeing as it occurs just after Nate (Jacob Elordi) has revealed himself to be Tyler, the boy Jules was falling in love with over a dating app, and threatened to ruin her life if she tells anyone she slept with his father, Cal (Eric Dane)? Schafer says “something really exciting.”

“I think Jules, from the first episode, knows Rue is there for her and would do just about anything for her,” she told TheWrap. “And while I don’t think she necessarily suspected a romantic side of that from the beginning — that we first get a glimpse of in Episode 3 and even before that — I think after her heart is broken in this moment with Nate. She knows Rue is there and that Rue loves her on multiple levels, and so of course that’s who she turns to.”

“And in some respects, I think this is such a beautiful moment for Jules, because I love this idea of her turning away from this really repetitively toxic relationship she has with men and that she turns to her best friend,” Schafer continued. “And she finds something really beautiful and meaningful and intimate, and somewhat physical, with one of the people she feels closest to in life, who happens to be a femme person. And I think that’s really exciting for how it might affect her vantage point on her own sexuality and sense of romance.”

And that beautiful moment comes when Jules is in a very fragile state, having learned “Tyler” is actually Nate, a guy who has been out to get her since he found out she slept with his father — one of many married, older men she’s had sex with since hitting puberty.

Oh, and Nate tells Jules he’s prepared to turn her in for distributing child pornography — her own nude selfies, that she sent to “Tyler” — if she reveals Cal’s infidelity and act of statutory rape. And this move is “completely f–ked,” according to Schafer.

“I think more than anything, Jules was so excited to delve into a romance that felt real and was more than just some hookup in a motel room,” she said. “And I think she’s never really had much of an opportunity to experience that before, or even let herself experience that. So the fact that she’d gotten this far with Tyler was really exciting for her. And then to find out that Nate was catfishing her or playing her was heartbreaking just by itself.”

“And then he goes on to explain why, like, his intentions behind this, and it’s completely f—ed,” she continued. “So I think it’s another pretty traumatic experience as far as really letting her guard down with this person and for them to expose themselves to be different from who they were portraying them to be. And it’s a major turning point for the character.”

That twist comes toward the end of an episode in which we learn Jules’ childhood was riddled with dark moments, including her own mother driving her hours away from home and tricking her into being admitted into a facility due to Jules (whose gender at birth was male) starting to identify as a girl.

Schafer told TheWrap this storyline of Jules’ time spent at this center where she slices her wrists open after the doctors try to “cure” her came in part from “Euphoria” creator Sam Levinson’s own childhood experiences.

“From the get-go I could understand how deeply emotional it was, and I was curious as to where it came from and it started to make sense as to why she acts the way she does,” Schafer said. “And the way she’s acting out as a 17-year-old, you wonder where that’s coming from. And so to make that connection with this traumatic, at least one traumatic event in your life, it started to make a lot of sense. And then later on, after I’d been cast, and Sam kind of got into it more with me and we talked about it a bit, it turns out this is a true story for him and this is part of his experience, at least what happened to Jules earlier in her childhood and with her background story spending a lot of time in the hospital. It was really emotional learning the connection between her and Sam and where we’re seeing her now currently.”

“It was really exciting from when I first read the scripts to read about a trans femme girl who is battling battles outside of trans-ness and that she can be trans while exploring a multitude of other facets of her life,” Schafer said. “And I think that’s true to the trans experience. Being trans does influence just about everything in your life, but from a trans person’s perspective, that’s just your everyday and there are so many other parts of life that we struggle with or push through and those deserve stories on their own. So I think it’s really exciting to watch that now and have it be subtle.”