Kalush Orchestra, the ensemble that took home the Eurovision 2022 trophy earlier this month, has auctioned off the statue to support their country’s armed forces.

According to the band’s Instagram story, they raised $900,000 after crypto group WhiteBIT made the high bid.

“Friends, you are unreal. Thanks to everyone who donated and especially @whitebit_ua, they bought the trophy for $900,000,” the band shared. 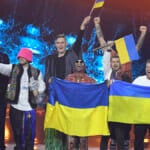 The crypto group also turned to social media to announce their auction win, explaining the funds will help buy drones for the Ukrainian armed forces, currently engaged in a war with Russia.

“Today there was a drawing of two lots from Kalush Orchestra and the Charitable Foundation of Serhiy Prytula,” read a post on the crypto group’s page. “We hope you followed the events live 😉 The purpose of the action was to raise 1 million euros for the purchase of a complex with three sides of PD-2 drones for the Armed Forces of Ukraine. The Eurovision Cup was bought by the WhiteBIT crypto community team for $ 900,000. This money will go to the account of @prytulafoundation to help the Armed Forces of Ukraine ❤️ We are grateful to the Serhiy Prytula Foundation, @kalush.official and the crypto community for the opportunity to actively help Ukraine. Together to victory!”

Ukranian TV host Serhiy Prytula noted on Twitter they raised a total of $1.2 million, which included a raffle for the pink bucket hat that Oleh Psiuk wore when his band performed at Eurovision. Prytula hosted the auction.