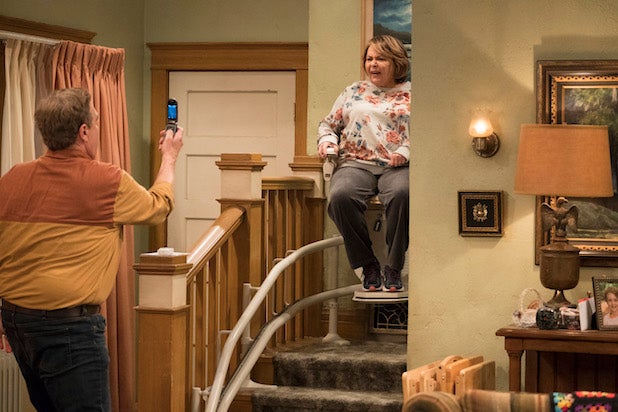 Everyone is loving “Roseanne” these days — including the Parents Television Council (PTC), which once lobbied for the Roseanne Barr sitcom to be canceled. But that was back in the day when the ABC series was apparently vulgar.

“It’s clear that ‘Roseanne’ resonated with audiences, and good for ABC for creating entertainment for family audiences who live outside of New York or Los Angeles,” he exclusively told TheWrap. “Our review of the show found no strongly objectionable content in terms of sex, violence or profanity, and we we hope that continues.”

“Congratulations to ABC for bringing back a show that’s not just a reboot, but one that families want to watch,” Winter continued. “Seems like a winning formula for future shows.”

He concluded: “It’s a pity that ABC has forfeited the chance for a powerhouse hour of back-to-back episodes of ‘Roseanne’ and ‘Last Man Standing.'”

Also Read: Roseanne Denies Twitter's Account of Her Trump Phone Call: 'THIS IS NOT TRUE!'

When the show was in its heyday in the 1990s, it was known to push the edge of what network TV was comfortable with. (One episode featured a same-sex kiss that caused a general stir.)

As Winter said in his statement, the council no longer finds “Roseanne” profane. But back in 1997, during the show’s ninth season, it singled out “Roseanne” as the culprit for the majority of all curse words on ABC, deeming the sitcom unfit for family viewing.

“More than two-thirds of ABC’s curse words were found on ‘Roseanne,'” the council said at the time. “During the February 18 episode, the title character says of her estranged husband, Dan, ‘That b—–d! I will certainly not calm down! He can just go [bleeped, but clearly the f-word] himself!’ She utters two more bleeped words with her back to the camera. The previous week, Roseanne comments, ‘I’m gonna be squeezing my a– into size 10 pants.’ Both episodes were rated PG.”

That’s not the only time the PTC has slammed Roseanne Barr for expletives. In 2012, they called her roast on Comedy Central the “worst cable TV show of the week” for “explicit profanity and unbelievably graphic sex talk.”

And yes, when discussing “Roseanne” you have to talk about Roseanne.

Many people believe Barr’s own political shift from liberal independent (remember when she lost the Green Party nomination and ran for President on the Peace and Freedom party ticket?) to Donald Trump voter is a key component to the massive Nielsen numbers ABC saw earlier this week.

(And some slightly more cynical folks might also pin the notoriously conservative PTC’s sudden support of “Roseanne” on the same switcheroo.)

Tuesday’s night’s premiere of “Roseanne” scored 18.2 million viewers, which not only bested the show’s 1997 series finale, but more than doubled what ABC expected. The episode ended up being Tuesday’s highest-rated entertainment telecast in six years (not counting sports or news), and the best demo number for any sitcom on any night since September 2014.

Also Read: Roseanne Denies Twitter's Account of Her Trump Phone Call: 'THIS IS NOT TRUE!'

Trump even bestowed a phone call to Barr to congratulate her on the high ratings of the revival. Piers Morgan believes it should have actually been Roseanne calling Trump to thank him, as the former “Celebrity Apprentice” contestant attributed her sitcom’s huge ratings to what he called “the enduring power of Trump.”

“So Roseanne, a Trump supporter on & off screen, delivers stupendous ratings in the rebooted series,” Morgan wrote on Twitter. “A message there, methinks, for all the screaming Trump-hating liberals: not everyone in America thinks like you…”

America — particularly the PTC-aligned middle part with all those red states — gets its next chance to catch the Conner Family on Tuesday at 8/7c on ABC.