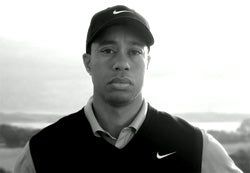 Tiger Woods made his return to professional golf at the Masters on Thursday. And despite the lack of celebrity media at Augusta (the private club restricted press access to golf reporters) and a two-plus hour window without live television coverage of his round available (Tiger teed off at about 1:45 p.m. ET; ESPN’s live coverage did not begin until 4 — Masters.com was the only place to watch until then) Woods remained the topic of the day online.

Part of the reason for this, of course, is Nike’s controversial ad featuring a beyond-the-grave voiceover from Tiger’s late father Earl Woods. (Nike released the spot on Wednesday.)

But on Google Trends, for instance, searches for the Masters were more prevalent than the ad.

Notably, Woods’ rival Phil Mickelson and 60-year-old Tom Watson — both of whom shot first round 67s on Thursday and were in the clubhouse before Woods — supplanted Tiger as a trending topics on Twitter early Thursday afternoon.

The galleries, as expected, were polite, and applauded Woods when he was announced. (Augusta has a pretty strict no heckling policy — and has been known to enforce it.)

But just because celebrity reporters were barred from the club didn’t mean Woods was immune from questions about his "trangressions."

A plane circling above the golf course dragged a banner that took a dig at Woods’ Buddhist faith. It read: "TIGER DID YOU MEAN BOOTYISM?"

Nike Ad Brings Tiger’s Dad Back From Beyond Grave (Video)