In collecting my impressions about “Everest,” which opened this year’s Venice Film Festival, I started thinking not about other epic adventure movies but about HBO’s “Show Me a Hero,” the recently-completed six-part miniseries about the battle over low-income housing in Yonkers, New York.

The two couldn’t be further apart in terms of genre, but both projects are true stories adapted from non-fiction. (Even though Jon Krakauer is a character in “Everest,” this movie isn’t an adaptation of “Into Thin Air”; the credited sources are Beck Weathers’ “Left for Dead: My Journey Home from Everest” and Peter Wilkinson’s article “The Death Zone.”) In the case of “Hero,” the lengthy running time allows us to get to know a variety of characters, from the politicians and lawyers involved in creating public-housing policy to the residents of Yonkers (inside and outside of that public housing).

“Everest” doesn’t have the luxury of spreading out; in just about two hours, screenwriters William Nicholson and Simon Beaufoy have to bring to life some 20 major characters — climbers, support staff, worried spouses, rival expeditioners — many of them spending big chunks of the movie covered in snow and wrapped up in parkas and sunglasses. This is one of those cases where fictionalizing a true event, or at least fusing two or three real people into one composite character, might have resulted in tighter storytelling.

As it is, the film feels like what happens when a studio exec barks, “Get me a ‘Gravity!'” That Oscar-winner — like “127 Hours,” “Into the Wild” and “The Grey” before it — falls into a new category we might call the Intimate Disaster Epic. Whereas those movies all focused on one person caught up in extraordinary circumstances and fighting for survival, “Everest” tries and fails to spin too many plates, with more than a dozen characters desperate to make it down from one of the world’s most treacherous slopes. Each of those real-life climbers no doubt had an interesting story to tell, but when shoved together like this they’re all reduced to types rather than people. 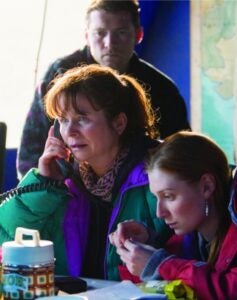 We meet expedition leader Rob Hall (Jason Clarke) who, we are told, pioneered the idea of taking guided tours up the mountain. By 1996, when the film takes place, there are any number of rival groups all competing to take Everest during a narrow window in May when ascent is even relatively possible, given the severe weather in that part of the world. Leaving pregnant wife Jan (Keira Knightley, struggling with a New Zealand accent) behind in New Zealand, Rob troops off to Nepal with a team that includes Guy (Sam Worthington), Helen (Emily Watson) and doctor Caroline (Elizabeth Debicki, shedding her couture glam from “The Man from U.N.C.L.E.”).

Among the climbers in Rob’s group are Krakauer (Michael Kelly, “House of Cards”), Weathers (Josh Brolin), Doug Hansen (John Hawkes) and Yasuko Namba (Naoko Mori). Each of these folks gets a mini-narrative — Weathers only feels alive on a mountain peak, but he’s promised wife Peach (Robin Wright) that this is his last one; mailman Doug got close to the summit last year and is determined to go all the way; Yasuko has climbed six of the seven summits of Everest and wants a clean sweep – not unlike the all-star cast of something like “Airport 1975.”

Because of the logjam of mountaineers, Rob teams up with American excursion leader Scott Fischer (Jake Gyllenhaal) to share resources and experience, but a perfect storm of impediments (including an actual storm) gathers to turn this trip into chaos. Soon, everyone is clinging to life (and the mountain), and viewers not already informed about this story won’t necessarily guess who lives and who dies.

That relative unpredictability is one of the strong suits of “Everest,” along with making Knightley’s and Wright’s characters more than just wet-eyed wives sitting next to the phone. Cinematographer Salvatore Totino (“The Da Vinci Code”) knows how to move his camera around the 3D IMAX space to make audience members clutch their cup-holders as climbers teeter over treacherous crevasses and narrow cliffs. (One of his sweeping helicopter shots of the summit, however, gets used twice for no apparent reason.)

It’s when “Everest” stops trying to take our breath away and starts wanting us to care about the relationships between the characters that it falls short, with at least one major player getting an off-screen death that undercuts any emotion we might feel about it. This fine ensemble of actors works hard to make individual moments land, but once the wind whips up, each character gets lost in a blizzard and is reduced to the color of their protective gear. Show me a hero, indeed.