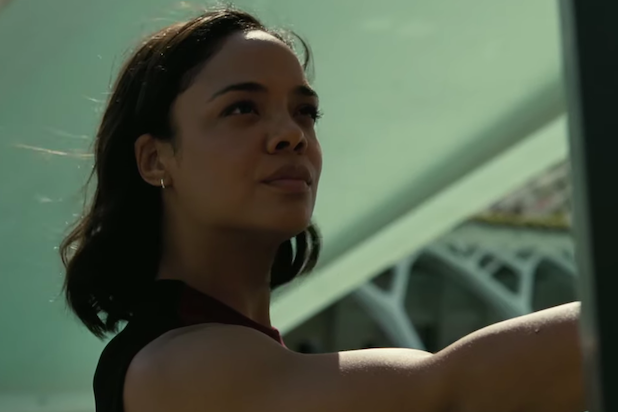 Do you feel like someone pulled your control unit out of your head after watching the “Westworld” Season 2 finale last June — including that wild post-credits scene? Of course, you do. So what do you do while you await the launch of the show’s third season? Start scouring the internet for all the news that’s out there about Season 3, obviously.

While the details we have on the next season of Lisa Joy and Jonathan Nolan’s HBO sci-fi series are limited, TheWrap has compiled a few tidbits that should tide you over for at least as long as it takes Dolores to get through one of her famous speeches about “the world” and all its “splendor.”

See our list below, which TheWrap will continue to update as more news about Season 3 becomes available.

1. Production is underway and some of the season has been shot in Singapore.

As TheWrap previously reported, Season 3 began filming in March. An HBO spokesperson told TheWrap in June that “filming locations for the third season of the HBO drama series ‘Westworld’ will include Singapore.” Los Angeles has also been used as a shooting location and will be a setting in Season 3.

2. The third season will be shorter than the first two.

As TheWrap reported exclusively earlier this week, Season 3 will consist of eight episodes, two fewer than Seasons 1 and 2 had. We do not yet know the lengths of these new installments.

3. Some of it is going to take place in the “real world.”

At the end of the Season 2 finale, “The Passenger,” three of the Hosts officially entered the real world in our central timeline: Dolores (Evan Rachel Wood), Bernard (Jeffrey Wright) — thanks to Dolores’ decision to bring him back — and whoever the heck is inside “Halores,” the Charlotte Hale-shaped one (played by Tessa Thompson) that Dolores inhabited before she rebuilt herself.

Also Read: 'Westworld,' 'Better Call Saul' and 7 Other Favorite TV Shows That Are Not Returning Until Next Year (Photos)

“It was always the plan to explore the real world and we have Dolores there, Bernard’s there and a creature that is certainly inhabiting Hale’s body is there [laughs],” Joy told TheWrap. “So we’ll come to know more of who ‘Hale’ is. There are three Hosts out in the world and next season will really be an exploration of what they find and who they become.”

Joy also clarified that there is someone in Hale who isn’t Dolores at the end there, ’cause Dolores is now back in Dolores, saying, “Yes, that’s one of the things we’ll explore next season.”

4. But not entirely in the real world.

We’ve seen Westworld, The Raj and Shogun World, but we know we have some more Delos Destinations to explore. “Well, not all of our favorite characters have managed to escape yet, so…,” Nolan said in an interview with Entertainment Weekly published after the finale. Yeah, OK, so more parks next time.

And we know, based on the San Diego Comic-Con trailer, that Maeve (Thandie Newton) and Hector (Rodrigo Santoro) are spending time in some kind of World War II-themed park.

Also Read: 'Westworld' Season 3 to Premiere in First Half of 2020, Deal in Place With Creators for 'Potential' Seasons 4 and 5

5. There will be some new faces joining the cast.

Newcomers for Season 3 include Aaron Paul, Lena Waithe, Scott Mescudi (rapper Kid Cudi), Marshawn Lynch and Vincent Cassel. While most character details for this group are being kept under wraps for now, we know that Paul is playing a man named Caleb who lives in Los Angeles and has some sort of connection to Dolores. Readers can find further info about him here.

The San Diego Comic-Con trailer we mentioned before features some of those new cast members and the real world and shows us what Dolores is doing and what Maeve is doing in the WWII world. You can watch it here.

7. Season 3 is not going to premiere for a while.

As TheWrap previously reported “Westworld” Season 3 will premiere in the first half of 2020. A specific premiere date hasn’t been revealed.

8. Not everyone from Seasons 1 and 2 is coming back.

You saw how many people died in the Season 2 finale, so it shouldn’t come as a shock, based on the sheer number of casualties, that not every star will be sticking with the series when it returns.

“We’ve had some interesting conversations,” Nolan told EW. “It’s a large ensemble cast and sadly we’re saying goodbye to some people at the end of this season. But as always with this show, who remains and who doesn’t is something we’re having a lot of fun with. There’s going to be a bit of a wait for a third season but we want to surprise and hopefully delight people with the way things progress.”

Jimmi Simpson, who played Young William on the first two seasons of “Westworld,” told TheWrap in February he has “not been invited” back for Season 3.

9. We know some characters are dead (at least for now).

Well, they are all complicated. Especially because Joy explained that whole deal with the five control units Halores smuggled out of the park. And then she tried to tell us Ford is really gone for good this time. Sigh.

10. And these other guys are definitely alive (at the moment).

Dolores, Bernard, Stubbs (Luke Hemsworth), the Man in Black (Ed Harris) aka Older William and whoever is in Halores.

11. The Hosts that “sublimed” into the Valley Beyond are most likely gone for good.

Teddy, Akecheta (Zahn McClarnon) and a few other lucky robots made it into their version of paradise, and Joy made it clear to TheWrap that Dolores has changed the coordinates of the Sublime to keep them away from humans forever.

“I think what she’s done is she fulfilled their wish,” Joy told TheWrap. “They wanted to escape to a digital space where they could be truly free and create their own world, untarnished by human interference. And in changing the coordinates and kind of locking in and stowing them away, Dolores has finally found a way to accept their choice and give them what they so desired.”

Joy told us that that crazy post-credits scene that scrambled your brain even more than the finale itself takes place at a later date than the rest of the story. A much later date.

“And we get the feeling that, in the far-flung future, the Man has been somehow re-conjured and brought into this world and he’s being tested the same way the humans used to test the Hosts. And that is a storyline that one day we’ll see more of.”

13. There is a deal in place with the showrunners for a fourth and fifth season.

Though “Westworld” has not been renewed for Season 4 — or Season 5, for that matter — HBO programming chief Casey Bloys told TheWrap during the Television Critics Association press tour in July that there is a deal in place with Joy and Nolan for a “potential” fourth and fifth season.

He also told us that Nolan and Joy will remain very much in control of the series, despite their new overall deal with Amazon Studios.

“They are 100% hands-on,” Bloys said. “We have deals with them for a potential fourth and fifth season. So the deal with them [at Amazon] is for, I believe, everything but ‘Westworld.’ And they’re very committed to ‘Westworld.’ So I’m not worried about losing their focus, they don’t lose focus,” he added.