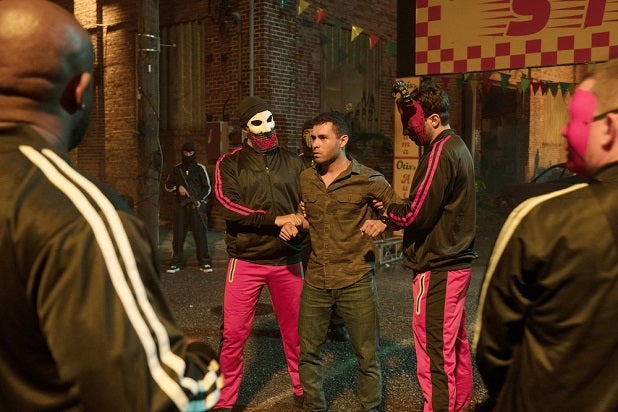 USA’s new show “The Purge” riffs on the horror movie franchise that’s now four movies deep, expanding on its central idea — that one night a year, all crime in America is legal, and participants can “purge” their hate and bad thoughts by murdering and pillaging during that time.

The movies take place in the future, in which the Purge has existed for years and become part of American life. Even in the first movie, 2013’s “The Purge,” there was a suggestion that the very idea of one lawless night was something even more sinister and political than just a required time for people to cleanse themselves. It’s not just one horrible night of freedom in which some people unleash their inner psychopaths on their neighbors, coworkers, friends and strangers — it’s also a form of control created by the government.

“The Purge” films have gone pretty hard on their political themes since the first film, with 2018’s “The First Purge” making some seriously dark comments about Donald Trump’s America. The movies have expanded greatly on the backstory and political situation in America in the franchise, and that’s the world the TV show is exploring even further. If you’re new to the Purge and jumping into the TV show, here’s all the essential backstory you need to know before watching.

Also Read: All the Ways 'The First Purge' Skewers America and Donald Trump

In the timeline of the franchise, the Purge started in 2015 on Staten Island, which is the subject of “The First Purge.” The idea of the Purge night came into being after a new political party was elected into power in America in 2014: the New Founding Fathers of America. This hyper-conservative, somewhat secretly fascist group is pretty much an allegory for the Republican Party — it’s mostly made up of rich white folks.

The NFFA was elected because of major economic strife before the election, which was creating civil unrest. While the party took the presidency and control of the government, it still struggled with the economic problems that already existed, like massive unemployment, poverty and over-population. In “The First Purge,” the party is approached by Dr. May Updale (Marisa Tomei), who wants to try a sociological experiment where people are allowed to commit crimes one night a year, as a sort of safety valve against violent feelings building up inside them. She believes this purge will help eliminate crime.

The ins and outs of the Purge are simple. From 7 p.m. until 7 a.m., all crime is legal and no laws are enforced, including murder. During that time, emergency services are also suspended, essentially creating a situation in which no help is coming. Certain things are off-limits, though: people can’t use weapons above “Class 4,” which seems to be anything more deadly than a machine gun. They also can’t attack government officials of “Rank 10,” which isn’t really explained, but likely means the top echelon of elected officials.

Staten Island sees the first Purge night, and residents are offered money by the government to stay on the island during the experiment, even if they don’t decide to Purge. The people who do wear special contact lenses that stream their vision to the government, allowing them to see what people actually do on the night.

The experiment doesn’t go as expected, though — most people on Staten Island don’t want to purge, and the ones who do mostly just commit lower-level crimes like looting. People even have block parties, rather than murder sprees. The NFFA secretly releases groups of mercenaries (most of them also white supremacists, it seems) to skew the results and make it look like people have been purging. They also have Updale murdered so she can’t blow the whistle. The government then convinces Americans that the purge is a good thing that the country needs, and in 2018, ratifies an amendment to the Constitution to create a nationwide Purge night.

“The Purge” takes place in 2022, and it seems like the Purge is working for America. We’re told crime is at an all-time low, unemployment is at one percent, and violence is nearly non-existent. It also becomes clear immediately that people with money are able to pay for elaborate security systems and weapons to protect themselves, while the poor are not. People put blue flowers in front of their houses during the Purge to show they support the night, although it’s implied that houses that don’t have flowers, and thus don’t mark themselves as Purge supporters, might become the targets of Purgers.

We also see the protagonists of “The Purge,” James (Ethan Hawke) and Mary Sandin (Lena Headey), telling their kids that the Purge is a good thing for America — even if it seems they don’t really believe it.

The sequel to “The Purge,” 2014’s “The Purge: Anarchy,” leans into the political implications of the Purge much harder. It becomes obvious that there’s serious classism and racism at the heart of the practice, and we learn that the NFFA actually uses the Purge as a means of population control and of eliminating the poor, in order to keep the economy strong and specifically benefit the upper class. We also see some of the more personal effects of the night, as some people actually sell themselves to Purgers to be killed on the night, with the understanding that the money will go to their families.

There are also resistance groups forming to the Purge, who use the night to fight back against the NFFA. This idea is further expanded on in 2016’s “The Purge: Election Year,” which sees armed groups protecting neighborhoods from both real Purgers and government mercenaries. There are also other people who try to help people during the Purge by driving ambulances and providing other aid. There’s an “unwritten Purge law” not to attack people giving medical help during the night, something most Purgers adhere to, it seems. Other interesting elements of the Purge are “Purge tourists,” people who come from other countries in order to take part in the night of mayhem.

“Election Year” actually sees the end of the Purge, after at least 10 years of the practice. It’s primarily about the NFFA’s attempts to assassinate Senator Charlie Roan (Elizabeth Mitchell), a Purge victim and anti-Purge presidential candidate. By this point, anti-Purge sentiment has hit a pretty high point in the country, and the NFFA is trying to cling to power. In its attempts to kill Roan, however, the NFFA doesn’t bank on her head of security, Leo Barnes (Frank Grillo), or the anti-Purge rebels — and the heads of the party wind up getting taken out during their Purge Mass, at which they intended to sacrifice Roan. After she’s elected, the Purge is ended.

All of the “Purge” movies go hard on the horror aspect of being stalked by serial killers, and have developed some major class and race overtones. The USA show seems poised to continue developing those ideas and further delving into the version of America the franchise has created, in which just about anybody could be a killer, at least one night a year.

“The Purge” will premiere Sept. 4 at 10/9c on USA Network with the premiere and finale episodes simulcast on SYFY.