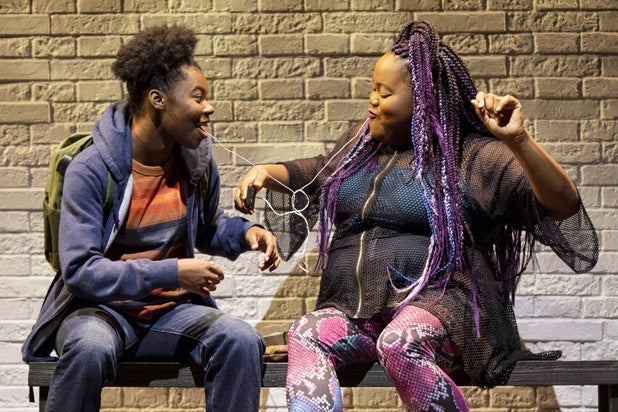 You cannot fault the young playwright Patricia Ione Lloyd for a lack of ambition. Her play “Eve’s Song,” which premiered at Off Broadway’s Public Theater on Wednesday, doesn’t so much bend genres as it does mash them up, like one of these oddball pairings of artists at the Grammy Awards.

On the one hand, she presents a domestic drama about a single mom (the solid De’Adre Aziza), her two teenage kids (Kadijah Raquel and Karl Green, both strong) and the college-age daughter’s first girlfriend (the effervescent Ashley D. Kelley).

But she also introduces three Spirit Women who haunt the family’s suburban home, move scenery between scenes and occasionally take center stage to offer testimonials about the violence perpetrated against African American women over the decades.

Yes, this is a play that grapples with racial injustice, the Black Lives Matter movement and the intransigence of bias even for highly educated, upper-middle-class blacks who sit down to home-cooked dinners and neatly snap cloth napkins into their laps.

Lloyd’s play works most strongly when it filters those Big Ideas through a more personal lens, as when the never-been-kissed Lauren goes on a first date with the budding social justice warrior Upendo (née Tiffany) — at a “die in” protest in Manhattan.

Lauren is less interested in the politics of the situation than the prospect of maybe losing her virginity at long last. “I hope I look woke enough to get with her because I cannot be laying in the street on a regular basis,” she says.

And Kelley, who was similarly magnetic as the lead in last year’s “Bella: An American Tall Tale,” provides every reason for Lauren to make such sacrifices to her comfort. Her Upendo is a mesmerizing masterpiece of self-invention.

Director Jo Bonney’s production smooths over many of the play’s rougher edges, including the more abrupt gear-shifts in tone and sensibility as scenes jump from naturalistic family drama to bantering sit-com to meet-cute rom-com to fourth-wall-breaking confessional to full-on magic realism.

Like the increasingly crack-marred house in which the family dwells (Riccardo Hernandez designed the set), in the end “Eve’s Song” can’t comfortably contain all of those jarring elements in such a slender frame. But Lloyd demonstrates that hers is a voice worth hearing.

For the record: A previous version of this review misspelled Kadijah Raquel’s name.