If there’s one problem that just about every “Star Wars” actor seems to face, it’s resisting the urge to make lightsaber noises while using one on set. Fortunately, Ewan McGregor found a workaround for the issue on the new Disney+ series “Obi-Wan Kenobi”: playing John Williams’ score while filming.

McGregor has long joked about how much he struggled on the prequel trilogy with not making the sound effects himself while wielding a lightsaber, as has Anakin Skywalker actor Hayden Christensen. Both have poked fun at themselves over the years for ruining takes because they were making the iconic noises. And apparently, even 17 years after the last of the prequels, the urge to do so is still strong.

“I think I still do them in my mind, for sure,” McGregor told TheWrap with a laugh. “It’s difficult not to, you know?”

But, this time around, director Deborah Chow and the “Obi-Wan” crew set the mood and managed to ensure that any sounds McGregor or his castmates made were covered — by playing John Williams’ classic score while shooting the battle sequences. You can watch McGregor’s full recollection of it in the video above. 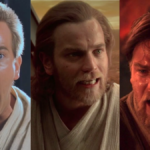 “When we were doing the fight scenes in this series, we played a lot of music on set. It’s so good to play with John Williams’s soundtrack, you know, to do the fighting,” McGregor explained. “So, whether I was doing them or not, we wouldn’t have heard it this time.”

While the famous “Star Wars” composer didn’t return for the entire series — composer Natalie Holt was tapped for those duties, as Williams is currently working on “Indiana Jones 5” — he did write a brand new theme for Kenobi.

“He didn’t have very long and it was quite last minute whether he’d have time or not. But he really wanted to write that theme because [Obi-Wan] was the one character that he didn’t write the theme for in the original movie,” Holt said in a recent interview with THR. “So I think he had this feeling that he wanted to complete the challenge.”