Jack Selby, a former PayPal executive, has partnered with filmmakers Tiller Russell and Duncan Montgomery to launch Horsethief Pictures. The company, which aims to release two to three pictures annually, is described as an interactive film digital distribution marketing company.

Russell said, “We think audiences are really smart, and if you give people a chance to collaborate with you and participate in the process, you’re gonna come together and find better things than you would on your own. That’s what we found throughout the filmmaking process in terms of surrounding ourselves with brilliant, visionary artists [and] technicians at every stage.

"And the same idea extends to the public, in the sense that we are inviting people to come in and write songs for the trailers, help us create comic books to extend it into new media, design iPhone apps that extend the experience,” he said.

Selby is managing director of Clarium Capital, a multibillion-dollar global hedge fund he co-founded. He has invested his own capital in Horsethief and will be its chairman.

Producer Montgomery (“Drop Dead Sexy”) will be the company’s head of production and business affairs. Director Russell (“Bad Boys of Summer”) will be head of creative development and will direct some 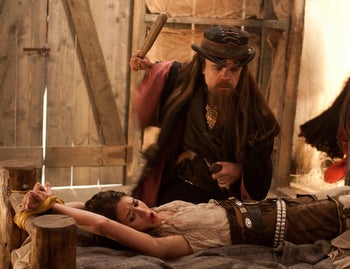 Selby said he has known Russell and Montgomery since they went to high school together in Dallas. He was reunited with them at a cocktail party thrown to raise financing for “The Last Rites of Ransom Pride” (left) which is Horsethief’s first feature. That film is expected to wrap before the end of the year, with a worldwide digital release planned.

“What we’re considering doing is trying to invert the traditional distribution model,” Russell explained. “Instead of spending a bunch of money to premiere theatrically, when then ends up driving DVD sales and downloads, we’re trying to invert that and release online to begin with and then expand to theatrical and DVDs.” He said they will have partners on that plan, but weren’t prepared to name them yet.

Several of the actors, including Dinklage and Yoakam, are participating in Horsethief’s viral marketing campaign. Russell explained, “We’re cutting character teasers for [the actors] to roll out on their Facebook platforms, their Twitter platforms, popularizing the contests that they’re going to be picking the winners on. We’re taking these pre-existing fan bases and culling off of those to get fans to come to us.

“The actors are remarkably responsive to it,” he continued, “because it’s a chance for them to communicate directly with the people that are their fans. It helps them tear down the barriers that have existed between stars and a traditionally distant public, and share their work in an unmitigated way.”

For example, “Last Rites” has two dedicated websites, www.lastritesfilm.com and www.whokilledthedwarf.com, featuring exclusive character-driven content to promote the film. On the latter site, Horsethief put a trailer introducing fans to the Dwarf, the character played by Dinklage in “Last Rites.” The site had generated more than 100,000 page views a week after its soft launch with little promotion.

Also through the internet, Horsethief is running a songwriting contest, where fans can submit original songs and vote for their favorite. Yoakam will announce the winner, which will be used in "Last Rites’" official trailer.

"We want fans to vote and choose," Russell said. "So as the media gets created, we’re going to present it back to the public. Everything gets cycled back and … it becomes a populist method of finding, supporting and then distributing that media to the people, by the people, directly for them.”

Horsethief has two other films in development: “Black Weasel,” adapted by Hampton Fancher (“Blade Runner”) from his short story and starring Yoakam, who also co-produces; and comedy “House of Pies,” written and directed by Russell.

Selby admitted the movie business is “quite speculative,” and “a lot of people have lost a lot of money.” However, he said, “What I’m aiming to do personally is put on my Silicon Valley hat and hopefully translate some of my experiences that I was fortunate enough to have when I was at PayPal and look at how film and entertainment is distributed from a different point of view.
“I really think there are a lot of opportunities where we can capture a user base that we can grow and work with over time. ‘Last Rites’ is really just the first film, and hopefully there will be a long string of projects that we’ll be able to give to our users and grow,” he said.
x
Looks like you're enjoying reading