Bravo is developing "Thintervention with Jackie Warner," a weight loss reality show headlined by the superstar from the producers of "The Real Housewives of New York City."

Shed Media U.S. is behind the project, which will feature Warner — star of Bravo’s three-season series "Work Out" — helping people with weight issues face their problems head-on. Bravo has ordered a pilot for the project. 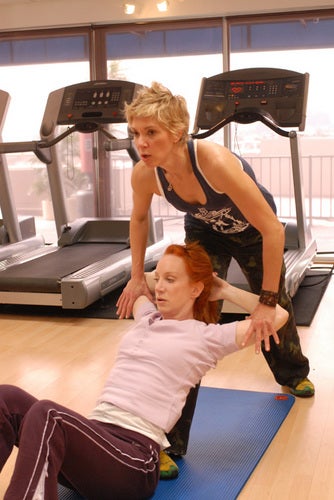 Bravo and Shed had been developing another project with Warner, announced earlier this year. That idea, which had Warner whipping gyms into shape, has been replaced by this new concept.

Inspired by the wellness camps Warner runs at her gym, "Thintervenion" will feature Warner working with participants in their day-to-day environment, rather than in a "Biggest Loser"-style fat camp.

According to Bravo, Warner will "kick butt and inspire drastic lifestyle changes for her overweight clients who are struggling to lose weight and get healthy for good."

If greenlit to series, "Thintervention’s" first season will follow people as they try to get healthier. Each episode will include Warner working out with the participants, a therapy session to discover why the person has weight problems, and a "life lesson" such as how to shop at a grocery store.

Warner starred for three seasons in Bravo’s "Work Out," which followed her daily life as the owner of LA’s luxe gym Sky Sport & Spa.

"Thintervention" is being executive produced by Warner and Shed’s Jennifer O’Connell and Nick Emmerson.

In addition to the New York edition of "Housewives," Shed Media U.S. is also a producer of "Supernanny" (with RDF Media) and NBC’s upcoming series with Jerry Seinfeld ("The Marriage Ref") and Lisa Kudrow ("Who Do You Think You Are").