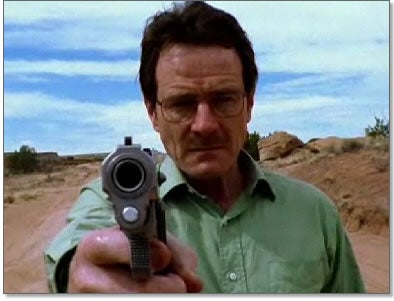 Breaking news on "Breaking Bad": AMC appears to have picked up a fourth season of the Sony Pictures Television-produced drama.

We’re still trying to get in touch with AMC to confirm — this is just a very good rumor right now — but a darn reliable source tells MoJoe the series got word Friday night that it will be back for another season next spring. "Bad" began its third season last month.

A renewal wouldn’t be a shocker given the strong ratings for "Bad," which premiered to its biggest audience ever in March — roughly 2 million viewers.

No official word yet from AMC.

UPDATE, SUNDAY 9:44 AM: Although insiders say that creatives on "Breaking Bad" were told a fourth season is ready for a pick up — ergo  Saturday’s rumor — there’s not yet an official deal between the network and Sony for the renewal. All parties are hopeful one will happen, however. (Nothing’s ever simple in TV land these days! ) AMC and Sony aren’t commenting.