The Writers Guild of America’s program that collects and distributes foreign levies from reuse of films and television shows will go under the microscope of a major accounting firm, according to provisions of a class-action settlement filed Tuesday.

The dispute — between the WGA and the class-action-status writers — concerns foreign payments for video rentals, cable retransmissions and sales of blank media such as CDs and DVDs. 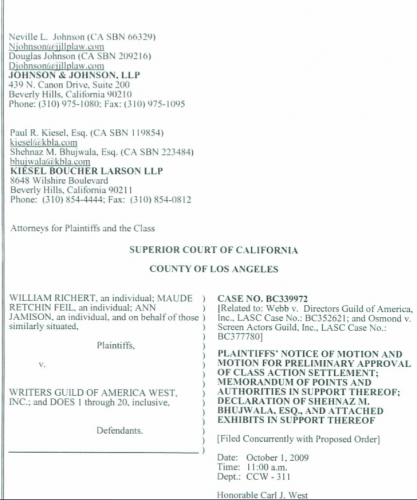 A deal between the two parties was announced on Sept. 1. Under terms of the deal, the WGA has agreed to pay out some $30 million in unpaid residuals and foreign levies that belongs to writers or their heirs.

Details of the agreement were filed in Los Angeles Superior Court on Tuesday, and will be heard before a judge on Oct. 1. (Read the full agreement here.)

– The WGA has accepted the hiring of a "big 4" accounting firm, such as KMPG or Ernst & Young, to review the foreign levies program from its inception until the present. The audit will seek to determine how much money has been collected annually, the amount distributed to writers and how much money is currently held by the Guild, including interest. The results will be posted and archived on the WGA’s website. The same accounting firm will conduct annual reviews of the program’s finances, beginning with this year.

– Independent consultants will do a one-time review of the WGA’s foreign levies program and make recommendations for its future administration. These consultants would be selected by both the WGA and the plaintiffs. The results would not be made public, and the WGA will decide which recommendations to accept. Any disputes would be handled in mediation.

– The WGA agreed to use its "best efforts" to distribute payments to writers within three years of collection. Both parties agreed that all funds cannot be distributed. The agreement also calls for the WGA to publicize the existence of the foreign levies program in industry and non-industry publications, and to call attention to it on the Guild website.

The settlement class of the class-action suit includes non-members of the WGA and their heirs. Writer William Richert ("Winter Kills") argued in his original lawsuit that the WGA had no authority to collect the money for non-guild writers.

Costs of the settlement’s provisions and general administration of the levy funds will be covered by interest earned on funds collected and a fee charged to writers receiving payouts.

TheWrap Shows You What the Foreign Levy Lawsuit Was All About