EXCLUSIVE
Lawyers for Jennifer Lopez have sent a cease and desist letter to shut down production of a movie about her life with her first husband, waiter and model Ojani Noa. 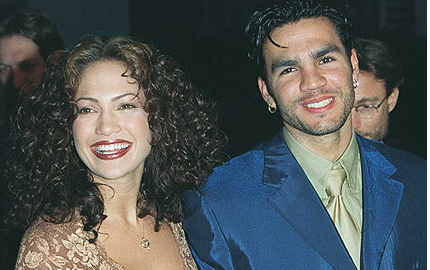 The film titled, “How I Married Jennifer Lopez: The J-lo and and Ojani Noa Story,” is meant to be a “mockumentary,” according to Noa and his producer, Ed Meyer.
The film chronicles Noa’s life story as a Cuban immigrant and his ongoing pursuit of Lopez, a la Borat’s pursuit of Pamela Anderson.
The film is currently casting, and will start shooting in February.
Citing a 2007 injunction against writing about Lopez’s personal life, the letter signed by attorney John Lavely states that the film “constitutes a blatant and malicious violation of my client’s legal rights and undeniably violates the clear command of the Court’s injunction.”
It continues: “Your announced intention to produce a motion picture …about Noa and Lopez and ‘their tumultuous marriage’ (as characterized on the website)” violates the injunction, the letter said, demanding that the production “cease and desist from proceeding.”
The 2007 injunction prevents Noa from “licensing, disseminating, distribution… any book manuscript or other written materials which contain private or intimate details about Lopez or Noa’s relationship with Lopez.” 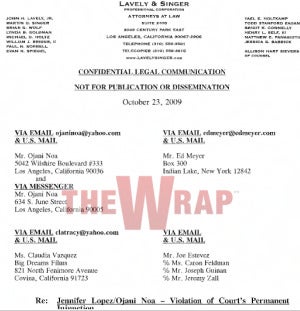 The 2007 order followed Noa’s attempts to write a tell-all book about Lopez in 2006.
But Meyer said the film is a “100% parody,” and as such is not impacted by the injunction. In his response to Lavely, Meyer wrote:
“As the premiere Entertainment Industry IP Lawyers, you and Marty (Singer) must know and realize that your threats are moot when it comes to film that is 100% a parody. “ (See full letter below.)
The casting call, which prompted Lavely’s letter, does not state that the film is a parody.
Casting has apparently begun on the project, with Noa listed as the writer of the film, and Joe Estevez (Martin Sheen’s brother) attached to direct.  Meyer said he had no intention to stop pre-production on the film, which he hopes to sell at the American Film Market in two weeks.
A former model who met Lopez when he was working in a Miami restaurant, Noa was married to Lopez  from 1997 to 1998. But he has long complained that Lopez cheated him out of a fair divorce settlement.
In an interview, Noa said he had not been able to get his career back on track since his divorce from Lopez. He said he still cares about her, and is hurt at how she treated him, citing her alleged affairs during their union.
“The whole movie is about me coming to this country and getting my dream shut down by somebody who I thought was a good person,” Noa told TheWrap.  “I was in totally in love with her. I gave my soul to her. It wasn’t my fault she shared it with 3 people. I was angry.”
Lopez has been married to singer Marc Anthony since 2004.
Here’s the full response to the cease and desist letter:
To: Jay Lavely, Esq.
From: Ed Meyer
cc: Marty Singer
cc: State Bar of California – Attorney Complaints
October, 23, 2009
Re: (Untitled) Ojani Noa Mockumentary Film
Dear Jay and Marty,
CEASE AND DESIST
The (Untitled) Ojani Noa film is a "Mocumentary", basically a parody ala "Borat".
The untitled theatrical film is a 90 minute Mockumentary (which legally is a parody) ala "Borat" (seeking Pamela Anderson). The film consists of Ojani Noa still being in love with "Jennifer" in 2010, and his many attempts to regain communication with her, so as to convey his purported never ending love for her.
As the premiere Entertainment Industry IP Lawyers, you and Marty must know and realize that your threats are moot when it comes to film that is 100% a parody.
You do know that not one person prevailed in any of the "Borat" lawsuits, and you won’t prevail against this film. Your one letter didn’t offset the dozens of major distributors who wrote and called me yesterday and today, wanting to distribute this film sight unseen in two weeks at the American Film Market.
Please cease and desist your and your clients tortious behavior. Please be advised that you and your client Jennifer Lopez have now knowingly damaged me, and my production via the Tort of Interference, and on your and your firm’s part, Libelous communications contrary to State Bar of California Regulations, among other tortious behavior.
CEASE AND DESIST
Please guide yourself accordingly,
/s/
Ed Meyer
x