Fans of NBC’s "Parks and Recreation" can exhale: The show will be back next fall. 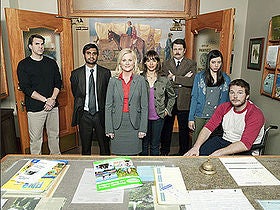 After an OK start last spring, "Parks and Rec" has turned into a major buzz magnet among critics and bloggers, landing on a slew of year-end top 10 lists. The series’ ratings, while still softer than NBC would probably like, have been consistent and in line with other scripted series in the 8:30 p.m. Thursday time slot.

Season to date, "Parks and Recreation" is averaging a 2.3 rating/ 6 share in adults 18-49 and 5.1 million viewers overall, retaining 95 percent or more of the time period’s 18-49 lead-in with 13 of 14 original telecasts to date. The show also does well with ad-friendly rich folks, ranking among the top 15 primetime series on the major networks in its concentration of homes with $100,000+ annual incomes in its adult 18-49 audience.

NBC executives are also following the playbook used to turn both "The Office" and "Seinfeld" into hits. Those shows took two to three seasons to break through with viewers.

In addition to Daniels and Schur, Howard Klein and David Miner also serve as executive producers of "Parks and Rec."

A number of comedies have been getting early renewals this year. ABC picked up all three of its half-hours, while CBS recently greenlit another year of "How I Met Your Mother."