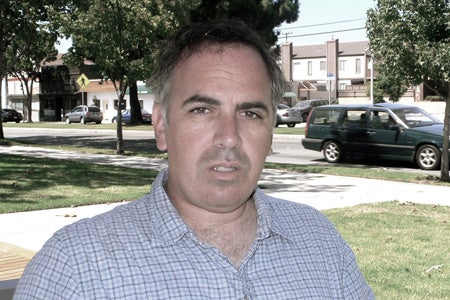 Richard Rushfield is leaving Gawker after just four months on the job.

According to a source at the company, Rushfield – who was poached from the L.A. Times in August by Nick Denton’s bloggy empire to become Gawker’s West Coast editor – is headed to something called the Digital Entertainment Corporation of America (or “Deca”), a Santa Monica-based online startup founded by Michael Wayne and Chris Kimbell, a pair of ex-Sony Pictures executives.

Deca launched in 2007 with about $5 million in venture capital and the lofty goal of creating “a new model for the online entertainment experience” by “identifying, funding, marketing and distributing next-generation digital content.”

Rushfield, who will serve as an editorial consultant, starts there in January. Before his Gawker gig, he had served as entertainment editor for the latimes.com.

No word on who will replace Rushfield at Gawker. An e-mail to Denton was not immediately returned.

An e-mail to Rushfield was not returned, either, although it appears he’s on a book tour. The name of the book: "Don’t Follow Me, I’m Lost."

UPDATE: Gawker editor-in-chief Gabriel Snyder wrote via e-mail: "The end of the year habitually brings staff changes at Gawker and this year is no different. While Richard is moving on, and I wish him the best in his
new venture, I’m getting ready to announce some additions to the Gawker masthead for the new year."