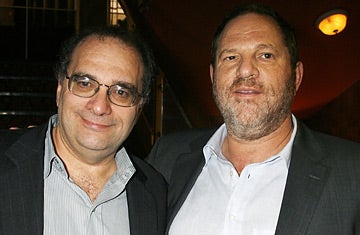 A shroud of silence descended Friday on The Walt Disney Company as Harvey and Bob Weinstein tried to close the deal to buy back the studio they founded three decades earlier.

As the bidding for the premium Miramax library continued to ratchet up all week, Harvey and Bob Weinstein – fearful the deal might slip away to a higher bidder – requested a window of exclusivity to try and meet Disney’s demands.

For its part, Disney would only deny that Miramax had been sold. The Weinstein Company had no comment at all.

Other bidders were being told that no deal had been closed.

Indeed, no deal was expected to be announced before next week, according to one knowledgeable individual. So it appeared that the Weinsteins had indeed won a sliver of time to sweeten their $600 million bid, and remove some of what were described as complicating conditions on their offer.

Were they to finally win back the studio, it would be a dramatic and emotional turn for two brothers who have played big stakes and often come close to the brink of ruin, only to walk away with victory – and, often, Oscar statues.

No deal for the sale of Miramax is expected on Thursday, or Friday, according to an individual close to the negotiations.

The individual said that the situation was changing rapidly with constant maneuvering by the various bidders, but that no decision would be made before next week.

Disney denies that any deal has been concluded for the Weinstein Company to buy Miramax.

"There is no deal," Disney spokesperson Zenia Mucha told TheWrap. "Reports to the contrary are false."

TheWrap has learned that the Weinstein Company has negotiated a window of exclusivity  with the Walt Disney Company to try to finalize a deal to buy Miramax.

The window is non-binding but gives Miramax founders Harvey and Bob Weinstein an opportunity to come to terms with Disney, and win back the studio that carries the name of their parents, Miriam and Max.

The time frame was believed to be two days, long enough to allow the Weinsteins to try to raise their bid higher, or improve the conditions of the sale. The Weinsteins’ bid is more complicated than those of the other two bidders, Alec and Tom Gores, and private-equity investors led by David Bergstein, and the brothers were trying to gain time in order to improve their offer.

Another insider said that the Weinsteins had sought the negotiating window, but Disney by Thursday night had yet granted it. Disney declined to comment on the matter.

The agreement comes as bids for the arthouse studio have begun to rise feverishly as the auction draws to a close.

Earlier on Thursday, the Hollywood Reporter reported that the Weinsteins have won the bidding war over Miramax.

But one knowledgeable individual told TheWrap this was not the case.

"There is no deal with the Weinsteins," said this individual close to the deal. "But it might happen in the next day or two."

Neither Disney nor the Weinstein Company would confirm the report.

The report came as the latest bid rose above $650 million from financier David Bergstein.

But Harvey Weinstein had already upped his bid to an all-cash offer of $600 million over the weekend. The Gores brothers in turn raised their bid this week.

The Weinsteins have been backed by Los Angeles billionaire Ron Burkle and Fortress Investment Group and Colbeck Capital. The Gores brothers are billionaires and offered to pay all cash.

As WaxWord previously reported, the offer for Miramax includes a major chunk of accounts receivable — one insider said it was $150 million, another put the figure as high as $250 million — which could be weighed against the purchase price. The "contract receivables" would be collected over the next three to four years, but ultimately mean that the buyer was not really paying the full, announced amount.

Meanwhile, Bergstein gave an interview to TheWrap in which he confirmed that he was willing to take his bid beyond $650 million.

"We said we would increase our price, slightly at the terms," he said. That bid is the highest of the three, by a lot.

In the interview, Bergstein dispelled misinformation about his involvement with a Miramax offer.

Bergstein would not personally be a stakeholder in Miramax should the bid be successful, he said. Instead, he is  representing three parties, including Ron Tutor, a construction tycoon, and two others. He would not identify the others but said they were not American.

But he denied that any Saudi Arabian was involved, as has been previously widely reported. None are financial institutions, as has also been erroneously reported, he said.

Bergstein described the business plan of his bidders would be to focus on non-physical distribution of Miramax’s movies, including video on demand, pay television,

He said he did not believe physical products like DVDs had a future.

"It would be a distribution company focused on the nonphysical aspects of distribution – teleivsion, vod, internet etc.," he said. "The hard part of the business – DVD – would be licensed out to other companies, because we don’t believe there’s much of a future in the hard goods."